Pat Riley: ‘When LeBron Left In 2014, We Should Have Given Max Deals to Dwyane Wade and Chris Bosh’ 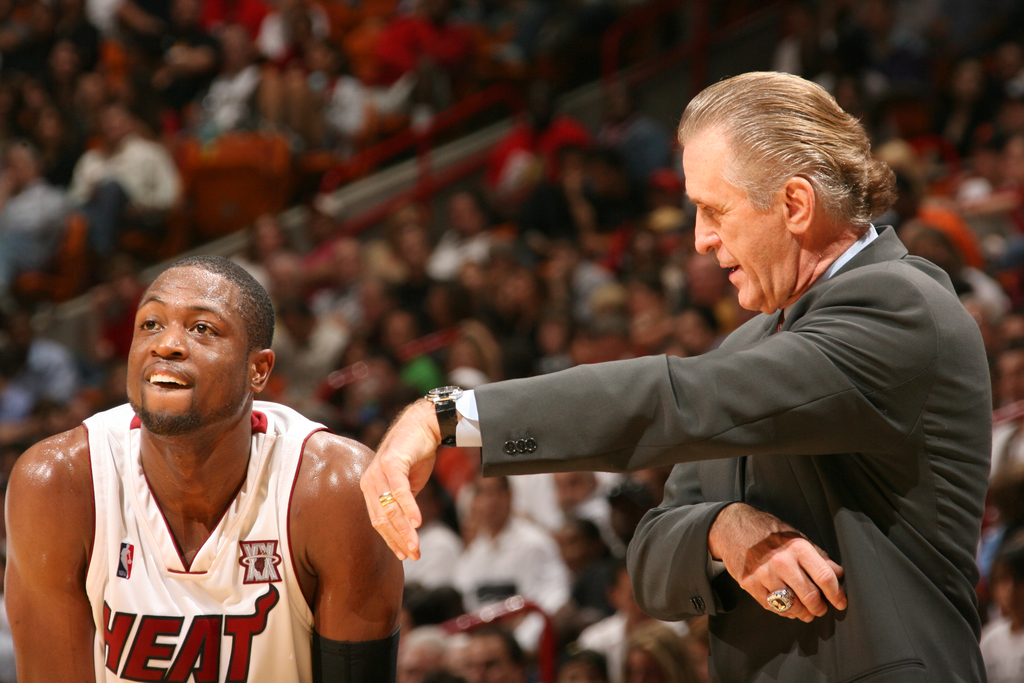 The split between Dwyane Wade and Pat Riley and the Miami Heat will continue to be a topic of conversation throughout the season. In the lead up to last week’s game between the Heat and Bulls, D-Wade was asked about his relationship with Riley and said that, “if you’re not with him, you’re against him.”

Riley has not spoken much about Wade since July, save for wishing Wade “good luck,” but with the former face of the franchise returning to Miami last week, Riley spoke with NBA.com’s David Aldridge and the Heat president expressed regret over not signing Wade and Chris Bosh to max deals in 2014:

If we ever had to do it again — and Andy (Elisburg, the Heat’s Senior VP of Basketball Operations and General Manager) bang our fists on the table — if we ever had to do it again, when LeBron left (in 2014), we should have given Chris the max, and Dwyane the max. And that was it. Instead of trying to say to Dwayne, I want to get another guy for you, but you have to sacrifice. And that was wrong. I should have given him — we should have given him — that then. Now, that’s a big second guess. But that’s on me. If I could have pushed that, and I could have pushed that. But I didn’t. I said we need to get more talent for him. But somebody was going to sacrifice. Like I said before, it doesn’t matter what happens to you, it’s how you deal with it. And we’re dealing with it. He’s dealing with it.

Riley also said that the Heat will “always love Wade” and that he sheds tears when he hears certain songs that remind him of the former Heat star:

We’ll always love him. We’ll never forget him. I can listen to ‘The Way We Were’ by Willie Hutch and I’ll come to tears just thinking about him. Or I can listen to “Always Together” by the Dells. See, only you and I know these songs. And I’ll come to tears thinking about him. I’m a cold-assed, cold-hearted Irishman. And I was raised in that kind of environment by a coach, by Dad, three brothers that were in the military that were athletes, eight coaches that were tough-minded guys. Believe me, that was a tough hit when Dwyane left.

The interview wasn’t just about past Heat players. Riley also said that Hassan Whiteside is “the perfect center” for today’s game:

When you look at how the game is played now, when you look at how it has evolved and how it’s played, he’s the perfect center. As a matter of fact, give me one team in the league that runs its offense through its center. There isn’t one. But there are a lot of centers that are mobile, that can leap, that are long, that are good in pick and roll. There’s a verticality to their game. They can catch it above the rim. They’re good defensive players. They can block shots. They can defensive rebound. I’m telling you, within a year, we’re going to be running a lot of offense through this guy.

Dwyane Wade: ‘I Thought I Would Be [In Miami] Forever’
Dwyane Wade to Kevin Durant and Warriors: Don’t Play Into Villain Role