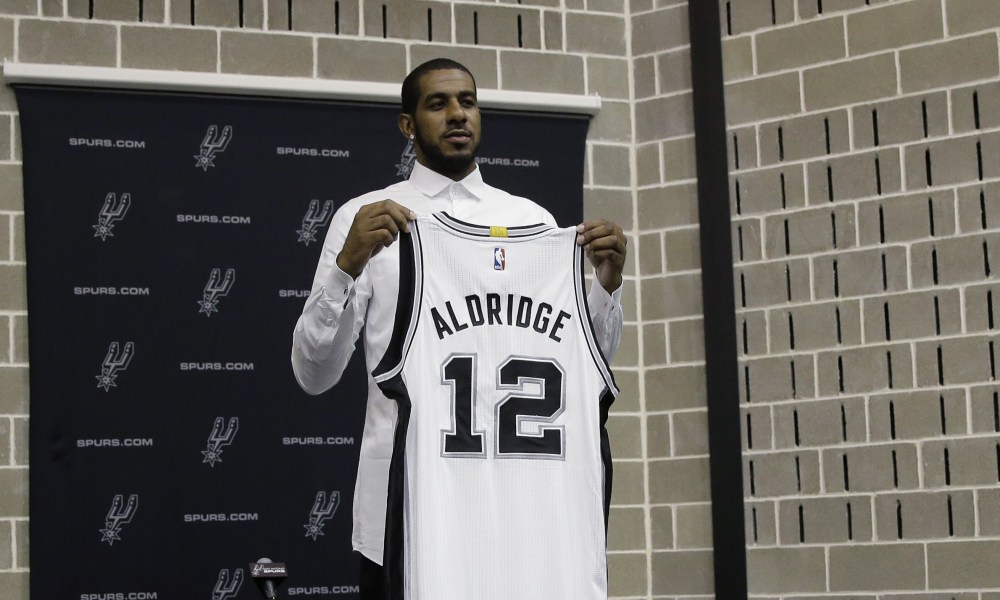 You really ought to check out the fascinating deep-dive by Yahoo! Sports into LaMarcus Aldridge’s winding free agency saga, which came to an end this past summer when the All-Star big fella signed on the dotted line with the San Antonio Spurs.

Despite not having the salary cap room to ink LMA, Pat Riley and the Miami Heat were granted a sit-down with the 30-year-old stud, and may have ended up pushing him to sign with their arch-rivals.

Aldridge says that Riley’s pitch convinced him that joining Tim Duncan and Gregg Popovich in San Antonio was the only logical choice:

The Heat didn’t have the salary cap space to sign Aldridge, and Riley’s wish for Aldridge to sign a one-year deal with Portland and wait for the Heat’s space in 2016 was a most unappealing proposition. Nevertheless, Riley made a case to Aldridge that turned out to be an immense blessing for the franchise that had obliterated the Heat in the 2014 NBA Finals. As the idea of joining the Suns gained real momentum, Riley’s message would go a long, long way toward validating the Spurs’ cause. Truth be told, Riley’s words resonated as deeply with Aldridge as anyone’s in the process.

“He told me, ‘You’re a good player, but you can be great,’ ” Aldridge said. “I’ve had good seasons on my own, but to win, you’ve got to have other big-time guys with you. When you have other guys who are willing to take that sacrifice with you – maybe you all go from averaging 23-24 points to 18-19 points – and you can all do it together. He was saying, ‘Hey, you might have to take a lesser role, but at the end of the day, you want to be known as a champion. Champions have to do different things.’ He brought up Chris Bosh, how he was averaging 21 in Toronto, and came to Miami, and people tried to say he wasn’t important. He told me, ‘We don’t win any of those championships rings without him,’ [and] that [Bosh] wouldn’t trade those rings for anything. […] Eventually, it becomes a road in your career, whether you have to decide whether you want to keep having these crazy stats, or do you want to win a championship?”

On the night of July 2, with Popovich returning for a lunch meeting the next day, Riley had delivered an unintended assist to the Spurs. He had turned Aldridge’s mind back toward San Antonio, setting the stage for Popovich to close the deal. “Yeah, the things [Riley] said were definitely more positive for me coming to San Antonio,” Aldridge said.