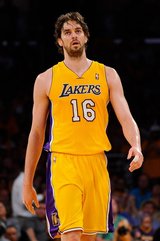 Pau Gasol is the most high-profile NBA star to claim he’d play overseas during the NBA lockout, telling the press in Spain that he’d consider playing in his home country, or perhaps even China.

According to the Los Angeles Lakers’ star big man — who will play in the European Championship in September — Spain is his first choice, but there are other options.

Pau Gasol wasn’t done making news, however, as he also expressed a strong desire to see his brother Marc play for a team other than the Memphis Grizzlies.

Gasol says “if there is a lockout, Spain would be the first choice — I wouldn’t say only one, but the first” on Friday. China, he adds, has “great potential” as an alternative to Spain. Gasol says sitting out a season would be too “weird” especially as the NBA is coming off a “great year” with the Dallas Mavericks beating the favored Miami Heat in the finals. As for brother Mark’s future, Gasol would like to “see him with a franchise that has better options” than the Memphis Grizzlies.

It will be interesting to see if any of the marquee names in the NBA actually sign overseas, especially in the event of games getting cancelled.

As for Marc Gasol, a restricted free agent this summer, it remains to be seen if the Grizzlies will be willing to pay him if another team swoops in with a monster deal for the rising big fella. Said team owner Michael Heisley back in May: “Marc will decide whether he wants to be here. We will aggressively go after him. He’s a restricted free agent, so we can match whatever’s out there. But obviously if Marc wants to leave, I’m going to have a different attitude than if he wants to stay. I hope he wants to stay. And after what we’ve done in the playoffs, I think he will.”