Paul George: ‘It’s Very Possible That I Can Play This Season’ 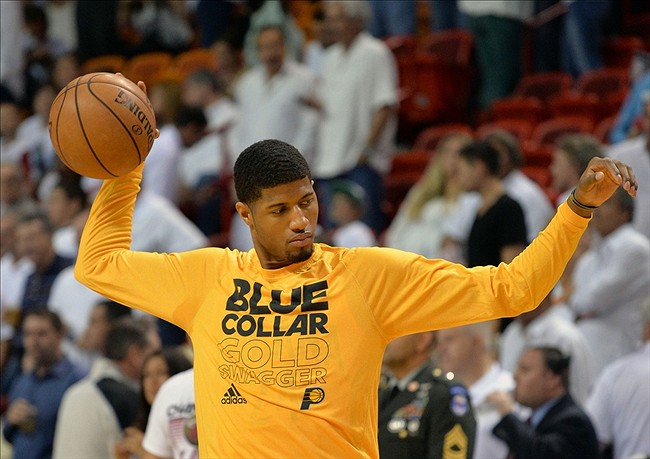 After gruesomely breaking the fibula in his right leg on Aug.1 during a USA Basketball scrimmage, the prevailing wisdom was that Indiana Pacers All-Star forward Paul George would sit out the entire season.

Doctors recently cleared him to put weight on the injured leg, and PG thinks there’s a chance he could re-join the Pacers on the court in the postseason. (During Media Day, George walked around the gym without crutches or a boot.)

“Everything happens for a reason,” George said. “It gave me a chance to be in the weight room and spend some time there. I’ve got to use this as a blessing. It’s tough to say you got hurt for a reason, but I honestly think I did. Now everything is starting to come back for me. I’m feeling great. I’ve been cleared to be in the weight room and work out. That’s been keeping me positive and sane.”

George said he will not travel with the Pacers early in the season, but is likely to do so on most of the road trips later. He reiterated his hope that he might come back at the end of the upcoming season, although the Pacers as an organization are operating under the assumption he won’t.

“It’s very possible that I can play (this season),” George said. “I’ve talked to all the guys and said, ‘Man, you guys have to get in the playoffs. That’s the best chance I’ve got of coming back and playing this year.’ I’ve already got it in mind that I could miss this whole year. I’m come to peace with that, but I’d love to be able to come back and play again.”