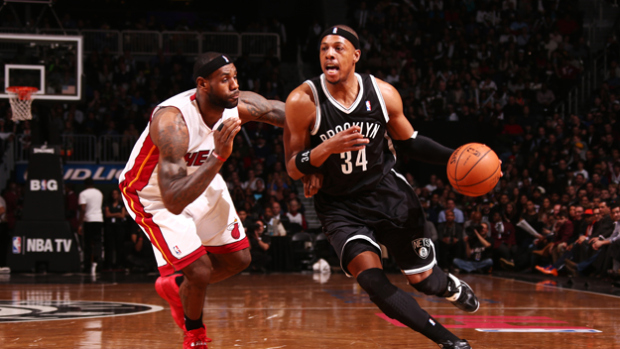 Washington Wizards forward Paul Pierce remains as hyper-competitive and confident as ever.

Pierce expects the Wizards to be one of the Eastern Conference’s best teams, and says he still has no love for long-time rivals like LeBron James.

Pierce understands that his mentality isn’t in line with the way today’s NBA stars feel about one another.

Per the WaPo (via ESPN Radio):

“The East I don’t think is as strong as the West, obviously,” Pierce said. “But I felt like joining Washington, I think we’ll be one of the top three or four teams in the Eastern Conference and we won’t have to have dogfights every night like you have in the Western Conference.”

“This is a different era,” Pierce said. “Guys are playing a lot more together in the summer. You see more friendships in the league. It’s not like in the 80s when you had enemies, or you couldn’t stand this guy, and there were fights all the time. These guys, they all get along. It’s a new generation. They all want to play with each other, they all want to win. They’re in USA Basketball all summer, they play in the summer leagues all summer, so they get to know one another and they try to join one another and try to win a championship. It’s a new era that we’re seeing and this is the way it’s going to be, guys, we’ve just gotta accept it.”

“Now Paul, you’re a little more from the old era even though you’re in the new era,” co-host Cris Carter interjected. “…You bring some fire to LeBron and them. I’ve seen you say some things to LeBron.” […] “I still can’t stand none of these guys,” Pierce said. “I want to beat all of them.”