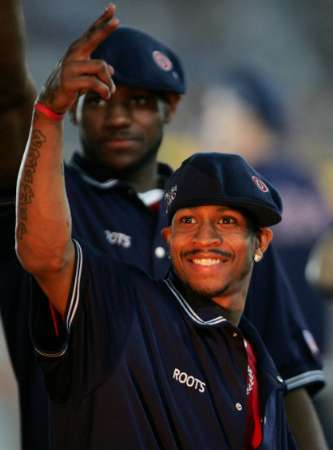 After spending 24 hours in Philly, I’m concerned for the people. For this post, I would like to speak directly to our Philadelphia readership: It’s okay. Calm down. It’s just a game.

As someone who cares way too much about sports, I never thought I would be the one saying that. But in Philly, you guys are really serious. I was at a bar near South St. on Friday night (it wasn’t all tourists), and the local news was on T.V. They had a whole half hour dedicated to how the Eagles rookie linemen will adjust to the pros. The regulars stared at that T.V. set, soaking in every word like it was the Israeli missle strikes. I am not joking. The amount of team apparel being worn on the streets for a team that doesn’t play a real game for three months was overwhelming. Me and my girlfriend took a tour of Independence Hall, which gives an American History refresher course of the events leading up to the Revolutionary War. Our tour guide, Ranger Gus, made at least three jokes about frustrated Philadelphians and their sports teams. I won’t even expose you to the horrors that is tourist trap Geno’s, the cheese steak place that reps the local sports teams hard.

It was pretty strange timing that I would find myself in that city on the same day Bill Simmons wrote a whole thing in his mailbag about how Philly needs a year off from sports. He speaks the truth on many levels about the state of the city and what’s happening with the Sixers. Most notably, they are stuck in this position of having to trade Iverson because of a series of moves by Billy King. They should really come out and announce that this is all Billy’s fault, they still love A.I., but thanks to Billy he just can not be kept on the team. He should be publicly ridiculed just as much as Isiah.

This is the Barkley trade all over again. Just incredible. Allen Iverson is a few years older than Charles was when he was sent West, but is very much still in his prime. True, you should expect him to slow down or take one hit too many and never get up again. But we’ve been waiting on that for a decade now and it still hasn’t happened. The Wages of Wins movement says his game is inefficient. He can’t seem to co-exist with a talented second banana and the team had to actually install a revolving door to the head coach’s office. But still, he’s A.I., one of the best reasons to watch the NBA. His numbers keep getting better, and he just has that aura of NBA royalty. Those kind of players should always stay with the same team throughout their career, even in the free agency era.

Now Philly has to trade him, and they will not get someone on his level back. Odds are the trade will be a complete disaster from a competitve standpoint. Unless Billy King finds a way to… no, it’s going to be a disaster. And the worst part is that the Sixers have to do it anyways. Next year Iverson and Webber will be making about $40 million, and they will be doing the same two years from now. Dalembert and Korver are getting money. If this were a movie, it’s the scene where our hero is handcuffed to a radiator on a sinking ship, and his only option is to shoot his hand off, cut his losses and move on with life. Yeah, it’s that bad.

I saw A.I. on the news and heard him on the radio, and he seemed like a man who is ready for change. I think it will be a good thing for him, and whatever franchise gets him is extremely lucky. He’s only available because of how badly the GM messed up the team around him. Billy King used the most played out phrase in all of sports, which is of “changing the culture” of a team. Right. That’s the problem. Not the salary cap hell or the yearly coaching change. To whatever team profits from this trade: enjoy the Iverson rennaissance.