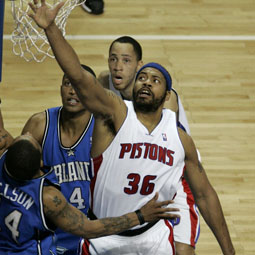 I am offended by the predictability of this series.

The Pistons won. The final score is irrelevant, but it was 98-90.

I previously “promised” Detroit would win Game 2 by 19 points; in fact, they led by 15 early in the fourth, but because the Pistons players, beyond getting it over with, care no more about this series than I do, they mostly stopped trying after that. The Magic actually “cut” the lead to six in the last few minutes, but really, to say they cut the lead is inaccurate and offensive; Detroit allowed the lead to be cut.

Also, in the future, any time I “promise” something on this website, assume that I am full of sh*t.

Anyway, as we all know, one sign of a good team is that they can play poorly and still beat a half-decent team. This happened last night. The Pistons weren’t horrible, but they weren’t all that good, either; they shot just 41 percent from the field and allowed the Magic to hit 46 percent of their shots. And of course, it didn’t matter.

What mattered was that most of Orlando’s offensive efficiency came from guys like Hedo Turkoglu (!) and Darko Milicic (!!!), and not from guys like Dwight Howard and Jameer Nelson, who shot a combined 6 of 21. Grant Hill was terrific but inconsequential. Meanwhile, Chauney Billups made every shot he needed to down the stretch, Rip Hamilton made up for a lousy shooting night by hitting 12 of 14 from the line, and Rasheed Wallace was at his ludicrous best at both ends of the floor.

And that’s all I’ve got.

How meaningless is this series? Even Steve Kerr and Marv Albert were joking about it in the fourth quarter last night. I don’t remember it verbatim, but the exchange went something like this:

Steve: “You never really get the feeling they’ll come all the way back, but at least they’re making it interesting.”

Steve: “Right, Marv. And I never got the feeling then, either.”

One of three things will happen in Game 3: Either the Pistons will win by double-digits, or the Pistons will win a deceptively “close” game that will have Orlando fans declaring a meaningless moral victory, or the Magic will win a close game because the Pistons didn’t even bother half-trying. If it’s the third option, there will be brief mumblings about how Detroit could be vulnerable and the Magic have turned this into a series, and Detroit will responding by winning Game 4 by 23 points.

Regardless, you’d be better off reading a book. Good day.