Put your caps and gowns on, It’s time for Graduation! 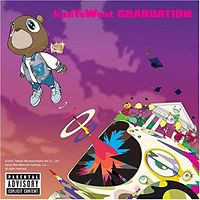 Before we get started I want to say something. My last Post was about Muhammad Ali and all the things he represents. I once read that Zab Judah admired Ali and wanted to be as great as he was. Now, he has a ways to go in and out of the ring.

I told you it was going to be crazy months ago and judgment day is less than a week away. I’ve been bumping Graduation for about a week or two and can’t stop. It’s as good as Kanye says it is. I also have Curtis and it’s not bad, but it’s not great either. It’s very… umm… what’s the word … normal! It is nothing special. Definitely the worst of his three albums. In fact, I think Graduation is third on Ye’s list also but you must remember that the Louis Vutton Don already has two XXL albums, this one is like a XL.5. Unfortunately my prediction of this being the best album of the year didn’t come through only because I found forever with the original Chi-town God.

Graduation is filled with so many ingredients and because I am so moved by this masterpiece I’m going to give you all the elements included. “Good morning” is compelling, “Champion” is inspiring, and “Stronger” is passionate. “I wonder” is outstanding, and we’re not half way through the album yet. “The Good Life” is celebratory, “Can’t Tell Me Nothing” is haughty, “Barry Bonds” is vigorous, and “Drunk and Hot girls” is peculiar but enjoyable. “Flashing lights” is debonair, “Everything I am” is educational, and “The Glory” is well…glorious! “Big Brother” is emotional and “Homecoming” is good but not as good as the original version.

Then there is Curtis and that’s so one dimensional, one flow, the beats are sub-par, and 50 is not known for his lyrical ability so you know he lost that battle too. It is a complete disappointment. I thought 50 was going to rep N.Y. a lil better than this. It looks like the Chi has trumped New York again. It feels like ’96 all over again and Kanye just dropped a double nickel on N.Y.

So I guess that’s all. What other albums or you looking forward to? Maybe Saigon, if they ever release his album? Lupe should be dropping soon, how soon I don’t know. In the mean time can I get a Lox album, an Outkast album, please Dre I’m tired of the remixes and teasers! You foolish youngsters are probably like “what about Wayne”, honestly he’s worn out his welcome as best rapper alive so don’t bother mentioning the carter 3. ’07 was kind of a good and bad year for hip hop, there are no new artists who you can say “I’m looking forward to his/her album” but at the same time some classic albums came out as well like Finding Forever.