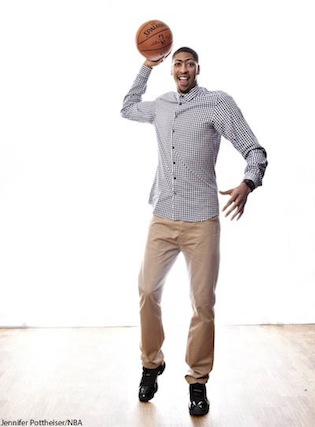 Despite being in just his second season in the League, and needing a Kobe Bryant injury to earn him a spot on the 2014 Western Conference All-Star team, Pelicans forward Anthony Davis is one of the most important people in New Orleans this weekend. As NOLA’s lone representative on the All-Star roster, he’s holding things down for the home team, while also playing de facto host to the rest of the NBA’s stars visiting his city for the next few days.

Thursday night, though, Ant took some time out of his busy schedule to help Nike launch a midnight hoops league at the recently overhauled gym at Joe Brown Park in New Orleans East, alongside Mayor Mitch Landrieu. Afterwards, we caught up with Davis to discuss his All-Star nod and more.

SLAM: How did you find out you were replacing Kobe Bryant in the All-Star game?

Anthony Davis: Coach called me and told me. It was a great moment for me, I was very excited, very happy. I just started smiling. But I had a big game that night against K-Love on ESPN. So it was kind of like, “What should I do?” I can’t have a bad game because I just got named an All-Star, but it’s on ESPN, so everybody’s gonna see it—it’s one thing if it’s on local TV, like, “Alright, nobody will see it” but on national TV with everybody watching, you can’t play bad. I ended up playing pretty well [26 points, 10 rebounds —Ed.] and we ended up winning, so it all worked out.

SLAM: What did you do next when you got the news that you were an All-Star?

AD: I got the news as soon as I finished eating my pre-game meal, and I was going to take a nap after, so Coach called me as I was eating. So I kind of took a nap, and then woke up and went to the game. So it wasn’t like I got a chance to tweet or Instagram anything.

SLAM: You didn’t make any calls? You really went right to sleep?

SLAM: This is your first All-Star game but you’re also kind of hosting it, since it’s in New Orleans.

AD: Yeah, everybody’s asking me all these questions about the city—where to go, where to eat, where to hang out at, everything like that. And it’s my second year, so it’s pretty rare to do something like this. I’m just going to have fun with it.

SLAM: Let’s say we’re having this talk 20 years from now. How many All-Star games will you have on your resume by then?

AD: Hopefully 20. It’s tough with all the guys we have in the West, but it just shows how good these guys are. You compete with the best in the world, so nothing is going to come easy.

SLAM: You gave fans a treat with that Instagram video of a few dunks the other day after practice. Any chance we see you in a dunk contest in the future?

AD: I don’t know. That was just a little fun me and the team had. Everybody asks me. It depends how I feel. As you go on in the season, all this basketball starts taking a toll on your body. But I don’t know. It’s not out of the question. It would be something that would be very fun to do.

SLAM: Do you have any dunks in your arsenal that we don’t know about?

AD: Nah, see, I can’t do the 360 windmill that Paul George is doing. And I’m too tall, so even if I do a 360 windmill it’s not going to look good, because I’m a big man who is supposed to do that. You never know.

SLAM: You’re the third most likely guy to win All-Star Game MVP this year behind LeBron James and Kevin Durant, according to the Vegas odds. What’s your reaction to that?

AD: That’s crazy, I didn’t know that. That’s big time right there. That just shows the type of support that I have, and the fans. That’s huge.

SLAM: What one thing are you trying to take from your experience this weekend?

AD: Have fun. Basketball is about having fun. Once you stop having fun, once you feel like you’re not having fun anymore, then you shouldn’t play anymore. Whatever you do, have fun.