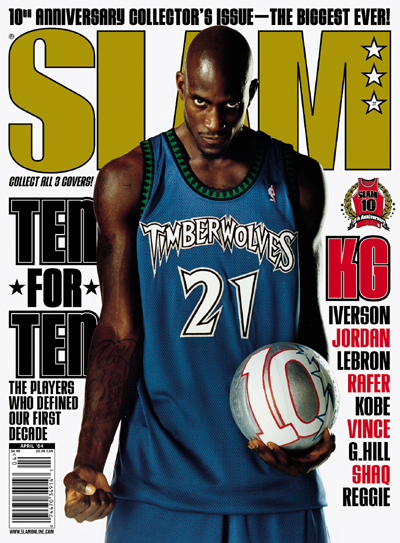 Two weeks ago, I flew all the way out to Los Angeles just to talk about shoes. Of course, I wouldn’t go that far to talk about footwear unless the people I was talking with had something good to say. And these guys did.

Our friends at adidas were working on their campaign for the next season, and they invited SLAM to Santa Monica to check it out. While I was out there, I had the chance to sit down and interview five NBA All-Stars: Kevin Garnett, Tim Duncan, Tracy McGrady, Chauncey Billups and Gilbert Arenas. That story will be the cover story of the forthcoming issue of KICKS, our annual shoe special, which will hit newsstands in a week or so. (And there will be a ton of content from that evening showing up here on SLAMonline in the next week or so — photos, videos, audio, interviews, etc.)

I’ve been covering the NBA long enough that I had either interviewed or spent time around most of those guys before. But somehow I’d never really spent much time around Kevin Garnett.

If you’ve never met KG, he’s pretty remarkable — loud, boisterous, funny, magnetic. The other guys at our photo shoot were all getting along fine, but when KG arrived and injected his personality into the proceedings the whole thing turned from just another photo shoot into a party. On the court, we often see KG as being only about his business, his face set, his smile hidden. Off the floor, at least on this day, KG was the student body president, the kid who can make friends with anyone.

For the last decade, KG’s career has been about promise and heartbreak. Each year Kevin goes out and posts amazing numbers, averaging at least 22 points and 13 rebounds per game for the last four seasons (and 20 and 11 over his eleven year career). He’s been remarkably durable, missing just 9 games since the 2000 campaign. But he’s also had to deal with intense failure, at least by his standards. As he makes clear below, the only reason he’s playing is because he wants to win a championship; yet in the real world, in eight trips to the playoffs, KG’s Timberwolves have escaped the first round just once, and that 2004 trip to the Western Conference Finals is the closest he’s ever been to the NBA Finals.

At the end of the night, KG and I sat down alone in the photo studio lounge to do an interview. I told him I was going to ask him mostly about his upcoming adidas signature shoes; after all, the story I was there for, and the magazine I was there for, is about shoes.

I’d promised KG it would only take a few minutes, and I only had 7 or 8 questions written in my notebook to ask him. The first question I asked him was an icebreaker, something fun that I’d also asked the other four guys. The other quartet each responded with answers no longer than two or three sentences.

KG’s answer was four paragraphs, totaling over 500 words long. And that was just on a fun question.

We settled in and had a wild, careening conversation, about everything from the Atlanta Braves and Boston Red Sox to KG’s self-professed title of the best housekeeper in the NBA (“I clean better than some maids!”) to his new shoes. KG seemed to be enjoying himself and he just kept talking, so I just kept asking questions.

Eventually, we got around to basketball, and a lot of interesting things were said. Instead of trying to read into his answers and put any words in his mouth, let’s let KG speak for himself…

SLAM: Last thing, a couple of basketball things…you happy with the way things are going this summer for the T-Wolves?

KG: Um…need to make some more acqui…you know, some more transactions, man. I feel like getting Mike James was a start, but that’s not enough. We need some more solid players to contribute. We lost Marcus Banks. I don’t know if they’re going to re-sign J-Reed — he’s a hard worker who I learned to appreciate and gravitate to a little bit. (Note: The T-Wolves re-signed Justin Reed this week. — LW) And I think in order for us to get back in the race in the West, with the Mavericks, the Suns and Timmy [Duncan] now, the Spurs, we’re going to have to have a dominant team, we’re going to have to some guys that run, lay it down, know how to play the game, bring some more veterans in. But, we gotta make some more transactions man. I don’t think the summer’s over.

You got, what, two months?
Yeah, but, you gotta do something, or, you know, something’s gotta change.

What are you most proud of at this point in your career?
How consistent I’ve been able to be. Consistency is the big thing that I work on. I don’t like to fall off, I don’t like to look at things like…um, I pride myself off consistency. It’s very hard night-in night-out to get things done, and I find a way to do ’em. I hope I don’t jinx myself or whatever, I’m just keeping it real. One thing I’m able to say is I’ve been healthy and I’ve been able to be consistent.

Speaking of consistency, how do you find the drive to keep going out there, man, even when the team’s not winning and…
Because I have expectations of myself. I do know if I don’t do or if I don’t bring a certain level, nine times out of ten our team is not going to move. Even though I have teammates around, the team obviously can do things without me, but it helps to have me there. A lot of things that I do bring to the table, I feel like it’s a plus. I don’t know, man…I’m motivated because of self, man. I feel like I’m the start and finish of a lot of things, and I don’t mind that pressure on me because I am an example and I’m willing to work toward something. But one thing that I can’t stand is if I’m working hard and the organization upstairs isn’t working hard, it’s not fair. It’s not fair to me. That’s not fair to a person who’s actually trying to get a championship. I feel like when it works is when both sides are just as active and as hungry.

When you were 18, how do you think…Let’s say if you were 18 again looking forward at what you’ve accomplished in your career, have you exceeded your expectations? Have you met your expectations?
I’ve met my expectations. Only thing I haven’t met in this league is achieve a championship. That would sort of sew it all together. The reason I joined the Olympic team was to win a gold medal, so I had to donate the ’99 summer to the Olympics, for the trials. 2000, same thing. I won that. I wanted to make the All-Star Game my second year. I went out, I did that. I was able to build upon something, I did that. I’ve always said I wanted to be a part of the All-Star Game, so I’ve been able to maintain that, knock on wood. Individually, MVP, both All-Star and regular season. Without Shaq, them looking for me in Atlanta, I wouldn’t have been able to win the All-Star MVP. Without Sam [Cassell] and Spree, Ervin Johnson, Trenton Hassell, Freddy [Hoiberg], I don’t think I would’ve been in a position to win the MVP. Because every year, I think the year before that I had a similar type year, it went to Tim [Duncan]. I already knew winning was everything, but it really solidified that. Without those teammates, man, I couldn’t have done none of that. You know, achieving all those things…I have, I have no regrets, yo. I don’t regret too many things in life, I just wish that the Minnesota Timberwolves would work a little harder, or work as hard as I work in the summertime.

And if could change anything, I wish Stephon [Marbury] wouldn’t have left. That was Steph’s decision, that wasn’t me, but if I had any control over it…

Are you guys cool now?
We’ve always been cool, we were just growing, man, you know what I mean?

Because you’d hear little bits here and there, and…
Steph left, yo. I don’t speak on it a lot, but Steph made the decision for his career, and I’ve gotta honor that. That’s a man making a decision on that. That’s what it’s been. If there was one thing I wish I could have, I would want to see him push the ball, Steph and I going for it this long, seeing where we end up at. Because I know we’d have won at least a couple of rings, I know that, I know that.

So, two and half months left until the season starts, what’s next?
Finish working out, finish bringing something to the table, finish being in the lab. Training camp starts in October. Hopefully the Timberwolves will have done what they need to do to make us better.

Would you want to leave, if the T-Wolves don’t get better…
I got to…

…down the road somewhere?
…I got to. If you’re not working towards a championship, then why are we in this? I’m in it to win, man, I’m not in it to be coming back talking about next year. I’m 30. I’ve probably got 4 to 5 years, you know what I’m saying? My clock is ticking, man. I’m almost like a woman who’s trying to get pregnant. My years are limited, so my clock is definitely ticking.

Appreciate it.
That’s what’s up.