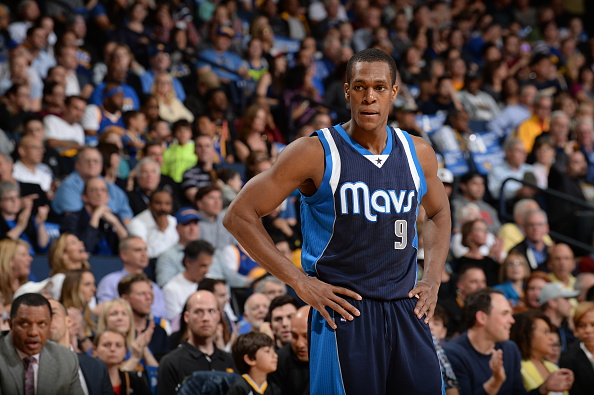 There’s been a lot of talk recently about Rajon Rondo, mostly stemming from his confrontation with Mavericks head coach Rick Carlisle. One report last week suggested Rondo was “extremely unlikely” to re-sign in Dallas (he’s a free agent at the end of this season). But in a Q+A with Marc Spears of Yahoo! Sports, Rondo says he’s open to re-signing with the Mavs. In fact, he says “I love it here.” In general, he feels misunderstood. You should read the whole interview here, but check out the pertinent quotes below—with special shouts to Rondo’s practice playlist choices:

Q: What do you think about the perception that you want to depart from Dallas?

Rondo: “First of all, I’m misunderstood in general. I don’t mind because I’m very quiet and I stay to myself. People are going to say what they want to say. I don’t talk, so I don’t know why they would say that. I don’t think I play as if I don’t want to be here. I give it all when I’m out there on the court.

“I’m always in communication trying to learn and get better and learn what’s better for the team. All I care about is winning. I made a lot of sacrifices, I believe, coming here. I try to give up the ball and move without the ball a lot more. It’s hard to adjust. But for the sake of the team to win that’s what I’m trying to.”

Q: So you are open-minded to re-signing with Dallas?

Rondo: “Why would I not be? There are a lot of things that I really love. Even the practices, we listen to music, my type of music. It’s the little things. Say we are going to California, we will play Too $hort and West Coast music. If we are going to Houston we might play chop and screw, Bun B or something like that. If we are going to New Orleans we might play Lil Wayne at practice, during shooting 30 minutes before practice. It’s a cool way they run it. We get our work in.

“It’s a player’s organization. Players first, from our plane, the way we travel. I don’t take that for granted. We eat good. We stay at the best hotels. Of course, it’s the NBA. But this organization has the best. They have PlayStation in the lockers. I don’t play games, but it’s nice to know I got a PlayStation. TVs in your own locker. I heard about it – [Brandon Bass] and J-Terry [Jason Terry] told me – but seeing it and experiencing it.

“I love it here. I don’t dislike anything. I’m not uncomfortable. Of course, the system is different, but I’ve been here for two months. It’s going to take time. Hopefully, sooner rather than later.”

Rajon Rondo Reflects On His Career: ‘I’m On My Last Leg Here in the League’