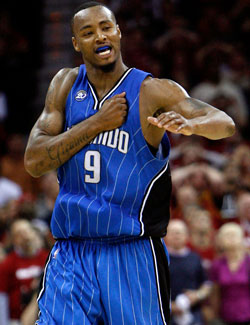 We’ve all quietly wondered about it. With it being so prevalent in other sports, of course. How, with the prominence of performance enhancing drugs in sports today, can the NBA keep its nose so clean?

Be sure, Rashard Lewis’ elevated testosterone levels will not mark doom for the NBA (at least Dwight Howard didn’t get busted… I kid!). It just serves as a reminder that drugs can aid NBA players as well. And it’s something to watch out for:

Orlando Magic All-Star Rashard Lewis will be suspended for the first 10 games of next season because he has tested positive for a testosterone-producing steroid, the Orlando Sentinel has learned.

According to league sources, Lewis was taking nutritional supplements at the end of last season that unknowing to him contained a substance commonly known as DHEA (Dehydroepiandrosterone) — a chemical compound made naturally in the body but also found in numerous over-the-counter supplements at nutritional stores. The substance is banned by most sports leagues, including the NBA.

The League released a statement saying this:

Rashard Lewis of the Orlando Magic has been suspended without pay for ten games for violating the terms of the NBA/NBPA Anti-Drug Program by testing positive for an elevated testosterone level, it was announced today by the NBA.

We’re not saying other players in the L use performance enhancers, but some certainly could. Everyone hates the possibility of the asterisk, but it’s at least reassuring to know the NBA’s current drug testing system (four random tests, between training camp and the end of the postseason) can detect something other than the Holy Herb.