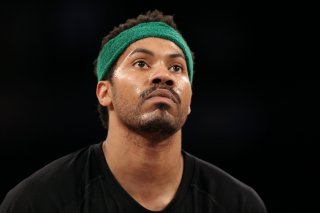 Retirement wasn’t sitting well with Rasheed Wallace, so he decided to join what is now the oldest team in NBA history. From Newsday: “Wallace, 38, signed with the Knicks on Wednesday for the veteran’s minimum, ending his two-year retirement. He walked away from the game in 2010 for personal reasons, but Knicks coach Mike Woodson helped bring Wallace back. The two have a relationship from their time together with the Pistons, when Woodson was an assistant on the 2004 championship Detroit team. Wallace said Woodson reached out to him to see if he wanted to return to the NBA and the four-time All-Star took him up on his offer. ‘I’ve been talking to Coach Woodson for the last six, seven months off and on,’ Wallace said. ‘He’s told me his ideas. He’s told me his plans. I just want to see if I can fit in there.’ Wallace will give the Knicks toughness and depth at the backup power forward and center positions. He’s a strong defender who can stretch the defense with his shooting. But Wallace has been away from the NBA for two years. He said he stayed in condition by playing pick-up games at his alma mater, North Carolina. But Thursday will be his first practice with the Knicks. Wallace said he expects to be ready for the Knicks’ regular-season opener Nov. 1.”