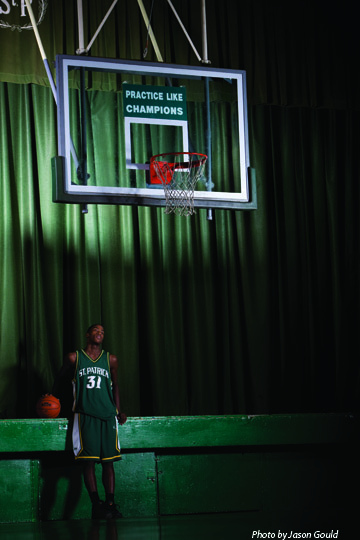 I wrote a mini feature on him in SLAM 127 which you all should read, but I wanted to drop a few more thoughts on him. You’ll be hearing his name a lot over the next…20 years, if things work out the way I think they could. After all, he’s only 15 years old now. Don’t let his age fool you, though. He might be the best basketball player in this country who isn’t playing professionally or in college.

I don’t mean that in the way of, he scores the most points or is the most physically impressive, or even that he’s the most skilled. It’s his complete package, approach to the game, on-court demeanor and ridiculous potential that set him apart from the rest. Gilchrist might be the most versatile, if not best overall, defensive player in the high school ranks. Despite his skinny frame (he goes about 6-8, 205), he’s one of the better rebounders you’ll see, as well. He has a great feel for the game and is a unselfish, willing and capable passer. With his athleticism, slashing ability and surprising toughness, he’s also an excellent finisher. But when you see him run the floor, that’s when you’ll get the picture.

The kid simply doesn’t know the meaning of coast. He plays every possession like it’s a tie game in Game 7 of the NBA Finals and there are 10 seconds left. His facial expression hardly ever changes, whether the sophomore sensation is getting chewed out by his coach at St. Pat’s in North Jersey, Kevin Boyle, or he just pinned an opponent’s shot to the backboard. Notice I said hardly ever—because the kid certainly does smile a lot.

That’s what makes the kid special. He has that ear-to-ear, Magic Johnson, Hollywood, count-each-of-my-teeth smile that lets you know he’s still a 15-year-old kid just having fun. I see a lot of high school ball, and the worst part about it (and trust me, there are quite a few negatives) is seeing a kid, top prospect or not, look like they don’t enjoy themselves on the court. When I interviewed Michael (shout out to his wonderful mother, Cindy Richardson, and his stepfather, Vince, for the assistance), there was no prima donna in him, no media training, no bored-with-the-interview answers. Although I (and a whole lot of other people) have known since at least last summer, when he destroyed Bron’s camp in Akron and other events, how good he was already, at 14, Gilchrist and his fam were almost naive to the fact. And that’s a good thing. A shy, regular, down-to-earth, 15-year-old kid should act like a shy, regular, down-to-earth, 15 year-old kid, no matter what expectations are placed upon him.

With his Camden roots (what up, Juanny) and playing with and against top comp year-round, the other side of Gilchrist’s development is also worthy of pub. His late pop balled for Camden High in its heyday, during the Milt Wagner/Billy Thompson era, when the school was popping out high school All-Americans like Nadya Suleman pops out babies. Instead of continuing the South Jersey legacy, he chooses to Elizabeth to attend powerhouse St. Pat’s  (alma mater of Al Harrington and Samuel Dalembert, among others), which plays one of the top schedules locally and nationally you can find, to supplement the camps and tourneys he plays in during the summer.

About two weeks ago, Gilchrist suffered an injury in practice, which was originally diagnosed as a broken foot. He was supposed to be out for the season, but it ended up not being as serious as first thought. My (and E-I-C Ben Osborne’s) immediate reaction was that it was bad timing for the story, but also that he would deal with it better than most players, including those twice his age (I’m looking at you, Tracy). He’s just that type of kid. Now it’s looking like he’ll be playing as St. Pat’s chases a Jersey state title, so this story (the first of many he’ll have in SLAM, we imagine) should actually be timed perfectly.

The last time I saw Michael play in person was in Florida, right before Christmas in Fort Myers. He played against some big-time competition, and definitely put up numbers, but the thing that stuck out to me was his poise and humility. His team had a first-round bye in the tourney, so when they got to the gym on the event’s second day, a close game was in progress. St. Pat’s team is filled with kids full of that East Coast swag, so they started to walk in, completely unaware of their surroundings. Realizing that a key free throw was about to be shot, Gilchrist held back his entire squad from walking in the doors until after the shot went up. An hour or so later, he put up 30 and 14 in a win against top prospect John Wall’s Word of God squad, without the help of guards UNC signee Dexter Strickland (suspended for the game) and top 2010 prospect Kyrie Irving, who was waiting to become eligible due to Jersey transfer rules.

But that’s not my point. Long story short (and I don’t want to heap too much pressure on a kid I first saw play as a gawky middle-schooler at Hank Gathers Rec Center aka Moylan at 25th and Diamond in North Philly), this kid could be the next Scottie Pippen. Except better. I try not to hype these high school kids up too much, but if his class is truly the next great batch of great young players, then I’m voting for Mike G. For President.