Report: Bucks and Pacers Discussed a Trade for Roy Hibbert 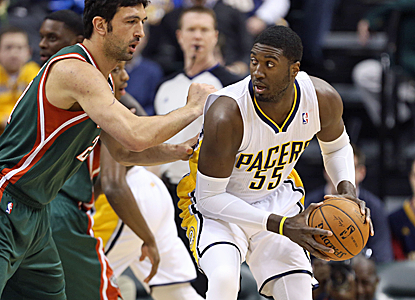 Following a disappointing regular season and continued struggles in the Playoffs, the Indiana Pacers reportedly put center Roy Hibbert on the market. One of the teams interested in the big fella, according to the Racine Journal Times, is the Milwaukee Bucks. The two sides are said to have had discussions regarding a potential swap:

In the days leading up to the draft in June, rumors circulated that the Bucks were seriously shopping beleaguered veteran center Larry Sanders.

A report recently surfaced the Bucks had offered Sanders to the Brooklyn Nets as part of a package deal that would have brought veteran center Brook Lopez to Milwaukee. Brooklyn reportedly rejected the offer.

I was told by an NBA official that the Bucks also had discussions with Indiana and were interested in acquiring veteran Pacers center Roy Hibbert, who hasn’t performed up to his lofty contract. Hibbert’s contract calls for him to earn $14.89 million next season. He then has a player-option the following season for $15.51M.