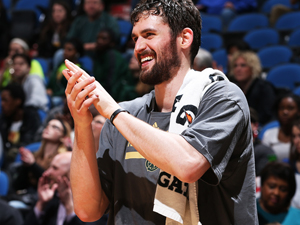 Cleveland continues to position itself for a potential Kevin Love blockbuster deal. The Cavaliers reportedly acquired three non-guaranteed contracts in a trade with the Utah Jazz. Per Yahoo!:

The Cavaliers unloaded the guaranteed deal of Carrick Felix – along with a future second-round pick and $1 million – for John Lucas, Malcolm Thomas and Erik Murphy, sources said.

Those three players can be included in packages as preludes to a Love deal, or in a Love deal itself to give Minnesota salary-cap relief. The Cavaliers hold an interest in keeping Thomas, who could be an inexpensive role player to strengthen their frontcourt depth, sources said.

Cleveland has to be creative in solidifying a deal for Love, who the Timberwolves want to package with Kevin Martin and J.J. Barea, several front-office officials said.