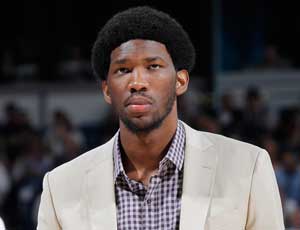 Joel Embiid is likely to miss the upcoming NBA season due to his right foot injury. He will be undergoing surgery on Tuesday, as reported by Yahoo! Sports:

Injured Philadelphia 76ers center Joel Embiid will have a second surgery on his right foot Tuesday and is expected to miss the upcoming season, sources told Yahoo Sports.

The No. 3 overall selection in the 2014 NBA draft missed his entire rookie season after having surgery in June 2014 to repair a stress fracture in the foot.

Embiid, 21, is expected to have a bone graft procedure similar to the foot surgery of Oklahoma City Thunder forward Kevin Durant. The Sixers announced in July that Embiid needed a second surgery after a routine CT scan in June revealed less healing than anticipated.