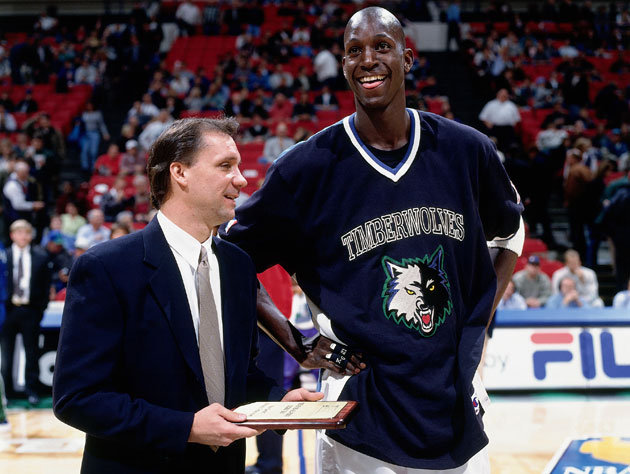 The Minnesota Timberwolves are bringing back Kevin Garnett, and want him to stick around beyond this season.

KG has made his desire to eventually own the franchise known.

According to the Pioneer Press, Garnett and head coach/team president Flip Saunders will try to buy the T-Wolves from owner Glen Taylor:

The contract extension Kevin Garnett, 38, will sign with the Timberwolves this summer will be for two years. During that period, Garnett and Wolves president-coach Flip Saunders are expected to try to form a group to buy the team from Glen Taylor.

Garnett has amassed more than $325 million in salaries during 20 seasons in the NBA. Saunders, who turns 60 on Monday, has made an estimated $40 million during 17 seasons as a NBA coach.

The Wolves, for whom Taylor paid $88 million in 1994, were valued at $625 million last January by Forbes. Taylor, who turns 74 in April, is amenable to taking in more limited partners. But he’s not interested in selling his team until he finds out what the Atlanta Hawks, who are for sale and currently are taking bids, end up going for. […] It’s clear, though, considering the NBA’s new $24 billion, nine-year media rights deal that begins next year, that Garnett and Saunders will need considerably more wherewithal to buy the Wolves.