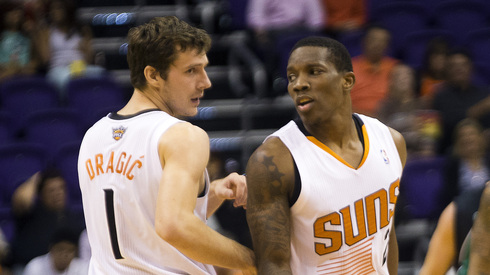 Given that no deal has been reached to date this offseason – nor has Phoenix been able to engineer a sign-and-trade – there’s a growing possibility that Eric Bledsoe accepts a qualifying offer and becomes an unrestricted free agent next summer.

To make matters even dicier for the Suns, fellow backcourt mate Goran Dragic is also hitting the open market in 2015. According to ESPN, the Los Angeles Lakers and Houston Rockets are two of the franchises licking their chops in anticipation:

The Lakers, for example, are just one team league sources say would likely make a hard run at both of them, based on the premise that the Suns couldn’t afford the cost of paying both at that point, theoretically making either Bledsoe or Dragic gettable. Sources say that Houston, furthermore, has Dragic on its list of potential targets next summer given how he’s blossomed since leaving the Rockets for Phoenix in the free-agent summer of 2012.

If Bledsoe signs the qualifier, furthermore, you can pretty much bank on him leaving Phoenix as soon as he gets the chance, because players don’t take that sort of gamble and then bury the bad feelings months later to re-sign with the incumbent team. And that would naturally increase Dragic’s leverage in the process, because Phoenix simply couldn’t stomach losing its two most valuable players, who both happen to play what is routinely regarded as the most important position on the floor in the modern NBA.