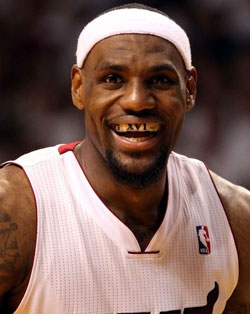 Miami Heat forward LeBron James has won the NBA’s Most Valuable Player Award, according to multiple reports. This is James’ third time winning the prestigious MVP, becoming the eighth player to win the award at least three times, joining Kareem Abdul-Jabbar, Michael Jordan, Bill Russell, Wilt Chamberlain, Larry Bird, Magic Johnson and Moses Malone. Much respect and salute, LeBron. ESPN has the details: “A person familiar with the decision told The Associated Press that James will be announced Saturday as this year’s winner of the league’s top individual honor, and that he’ll be formally presented with the trophy by commissioner David Stern on Sunday afternoon before Miami hosts Indiana in Game 1 of an Eastern Conference semifinal series. James said last week that while another MVP award ‘would be amazing and would be humbling,’ it’s not what drives him. In his ninth season, James still has not won an NBA title and it’s clear that, although he wanted to reclaim the MVP trophy, winning a championship is far and away his top basketball priority. James averaged 27.1 points, 7.9 rebounds and 6.2 assists — making him only the fourth player with those totals in at least two different seasons, according to STATS LLC, joining Oscar Robertson (five times), John Havlicek (twice) and Bird (twice).”