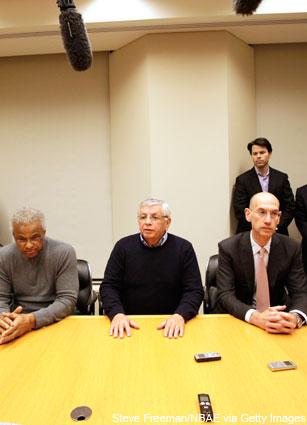 After 149 depressing days, NBA owners and players have finally reached a tentative agreement to end the NBA lockout. The deal was agreed on early Saturday, and if all goes according to plan, the League will begin a delayed, 66-game season on Christmas Day. After a secret meeting earlier this week, the two sides met for more than 15 hours Friday, working to try to save the season. For the lockout to officially be lifted, however, the deal must be ratified by both owners and players in the upcoming days. Not to speak too soon, but ladies and gentlemen, it seems our prayers have been answered!

AP has the details:

NBA Commissioner David Stern said it was “subject to a variety of approvals and very complex machinations, but we’re optimistic that will all come to pass and that the NBA season will begin Dec. 25.”

Barring a change in scheduling, the 2011-12 season will open with the Boston Celtics at New York Knicks, followed by Miami at Dallas in an NBA finals rematch before MVP Derrick Rose and Chicago close the tripleheader against Kobe Bryant and the Lakers.

The league plans a 66-game season and aims to open training camps Dec. 9. Stern has said it would take about 30 days from an agreement to playing the first game.

“All I feel right now is ‘finally,'” Dwyane Wade told The Associated Press.

Just 12 days after talks broke down and Stern declared the NBA could be headed to a “nuclear winter,” he sat next to union executive director Billy Hunter to announce the deal.

“We thought it was in both of our interest to try to reach a resolution and save the game and to be able to provide the mind of superb entertainment the NBA historically has provided,” Hunter said.

A majority on each side is needed to approve the agreement. The NBA needs votes from 15 of 29 owners. (The league owns the New Orleans Hornets.) Stern said the labor committee plans to discuss the agreement later Saturday and expects them to endorse it and recommend to the full board.

The union needs a simple majority of its 430-plus members. That process is a bit more complicated after the players dissolved the union Nov. 14. Now, they must drop their antitrust lawsuit in Minnesota and reform the union before voting on the deal.

Because the union disbanded, a new collective bargaining agreement can only be completed once the union has reformed. Drug testing and other issues still must be negotiated between the league and the players.

The settlement first was reported by CBSSports.com.

Owners locked out the players July 1 and the sides spent most of the summer and fall battling over the division of revenues and other changes owners wanted in a new collective bargaining agreement. They said they lost hundreds of millions of dollars in each year of the former deal, ratified in 2005, and they wanted a system where the big-market teams wouldn’t have the ability to outspend their smaller counterparts.

Players fought against those changes, not wanting to see any teams taken out of the market when they became free agents.