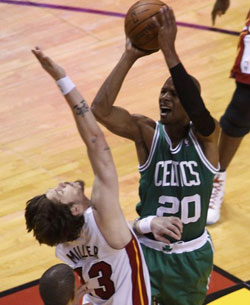 Ray Allen has joined the Miami Heat, according to multiple reports. After battling injuries during Boston’s Playoff run this past year, Allen—an unrestricted free agent—has decided to join LeBron James, Dwyane Wade and the Champion Heat, the team that ended the Celtics’ 2012 season. NBA.com‘s David Aldridge is confirming reports that Allen has agreed to a deal worth what looks like less than what the Cs and Grizzlies were offering: “The Big Four are no more. At least not in Boston. Free agent guard Ray Allen agreed to sign Friday evening with the Miami Heat, ending his five-year run in Boston that was highlighted by two Finals trips for the Celtics, including the 2008 championship. Allen chose Miami over Boston, Memphis and Minnesota, giving the Heat a potentially lethal perimeter option to go along with LeBron James, Dwyane Wade and Chris Bosh next season. The 37-year-old Allen visited Miami Thursday and left town Friday morning after being courted by the Heat organization. He was supposed to visit the Clippers on Friday, but that visit was cancelled after Los Angeles agreed to terms with free agent guard Jamal Crawford on Wednesday. Allen never met with the Grizzlies or Timberwolves. The Celtics had been optimistic that they’d be able to re-sign Allen after agreeing to terms last week with Kevin Garnett on a three-year deal and reaching terms on Thursday with forward Brandon Bass. Allen took less money to go to Miami. All the Heat had to offer was the taxpayer’s exception that starts at $3.09 million next season and can go out a maximum of three years and $9.5 million. Boston had offered a two-year, $12 million deal, and the Grizzlies were willing to give Allen their full non-taxpayer mid-level exception that starts at $5 million next season and can go out as long as four years. Heat owner Micky Arison broke the news on his Twitter account Friday, writing, “Its 2:30am in London and I was just woken up with great news. Welcome to the family #20!!””