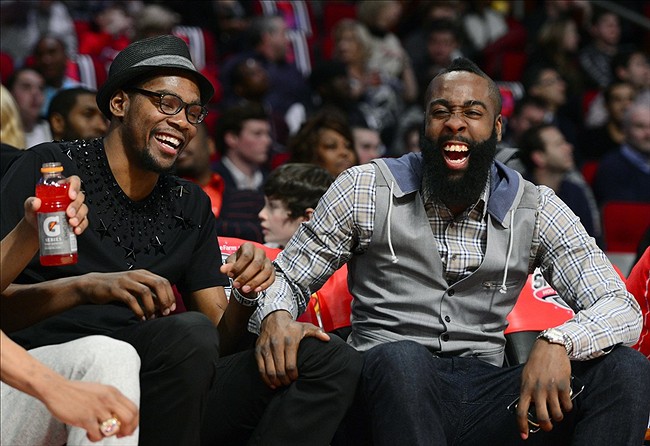 Like every other NBA team with cap space, the Houston Rockets are expected to go hard after Kevin Durant when he becomes a free agent two summers from now.

James Harden, Durant’s former teammate in OKC, will reportedly play the role of lead recruiter for the Rockets.

The Rockets are widely expected to take a step back this season, thanks to all the depth they squandered on the [Chris] Bosh dice roll, but they expect to have significant salary-cap room next summer — when they can chase point guards as accomplished as Goran Dragic and Rajon Rondo if they choose — as well as in the summer of 2016.

Which is when, sources say, they’d like to give Harden an opportunity to serve as Houston’s lead recruiter in the pursuit of a free agent named Kevin Wayne Durant.

“We are always going to be swinging big,” GM Daryl Morey said. “We’re only about trying to win championships and how to make that happen. We take big swings at things. Obviously, it worked out the last two summers, but the only way you can land a James Harden or a Dwight Howard is by taking big swings. Sometimes, you hit. Sometimes, you miss. Bosh chose to stay in Miami, but that’s not always going to be the case. […] If that had worked out, everyone is obviously writing a very different story about the Rockets, but it didn’t work out. And we had to choose the best path when it didn’t work out. […] I’m very comfortable we made the right decisions all along given the info we had. It’s only the scenario where you know all the information at the end where you can go back and say ‘This was a good decision or this was a bad decision.'”