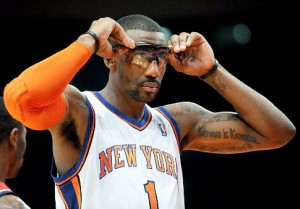 Philadelphia is currently well under the salary cap floor — NBA teams are required to spend at least ninety percent of the salary cap (set at $63,065 million.)

The Sixers have only so far committed to $39.988 million in player salaries, and may reportedly end up taking on Amar’e Stoudemire’s expiring contract, which has long been said to be a Philly target. Per Basketball Insiders:

What happens if the 76ers don’t meet the minimum at the trade deadline? They would be required to pay their existing roster the shortfall on a schedule agreed to by the Players’ Association.

So if the 76ers don’t meet the minimum, their existing guys get bonuses and the team gets to defer paying it until the end of the season.

What’s far more likely is that the long rumored Amar’e Stoudemire to Philadelphia deal gets done at the deadline. The Sixers take on Stoudemire’s $23 million salary cap number, which pushes them way over the minimum. They would only owe him roughly 30 percent of his remaining contract, so they’d end up paying him $7 million in cash and likely extract a draft pick or a rookie scale player for their troubles.