Report: Taj Gibson Not Happy to Come Off the Bench in Chicago 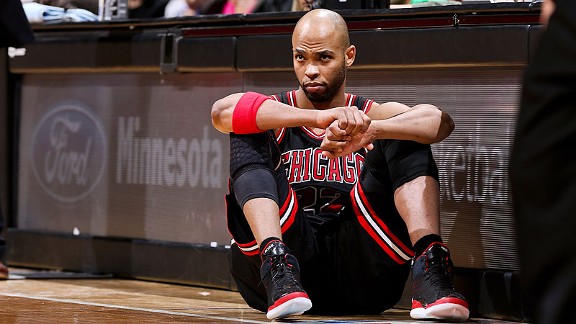 There was some tension regarding minutes last season for the Chicago Bulls, as Carlos Boozer made noise as his role was diminishing before the team waived him this summer.

Taj Gibson, 29, likely envisioned stepping into a starting role going forward, but that might not be the case (see: Gasol, Pau.)

Gibson is reportedly less than “thrilled” with the prospect of continuing to come off head coach Tom Thibodeau’s bench. Per CSN Chicago and SLAM contributor Aggrey Sam:

Privately, Gibson isn’t too thrilled with the prospect of continuing to be a reserve, according to multiple people familiar with the situation, but the upbeat, team-first player values winning and chemistry too much to make it an issue or distraction. Furthermore, being an underdog his entire basketball career, it could serve as motivation and help him thrive, building upon last year’s bounce-back campaign and improvement as a scorer, which came after a disappointing, injury-riddled season immediately following a long-term contract extension with the Bulls on Halloween 2012.

In short, while Gibson might not like the writing on the wall, he’ll make the proper mental adjustment and the expectation here is that once again, the affable fan favorite will make his usual impact as one of the NBA’s most underrated defenders, explosive finisher with low-post polish and a reliable spark off the bench for a championship contender.