Report: Tension Between Kyrie Irving’s Camp and the Cavs 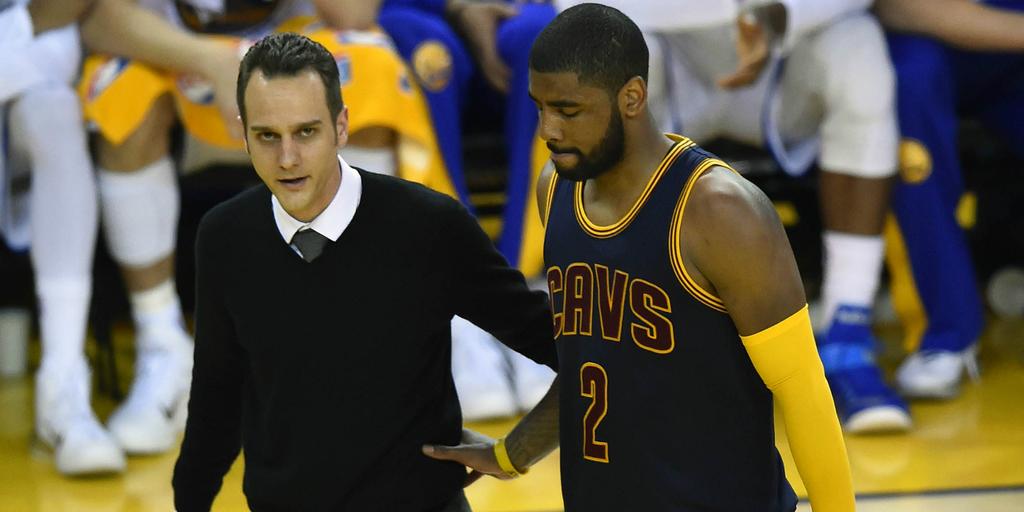 Irving’s aggravated left knee may end up derailing Cleveland’s title hopes, and according to ESPN, it has been a source of tension between the 23-year-old’s camp and the organization.

Kyrie’s people understandably want the most cautious approach possible with his health, while the Cavs—dealing with massive expectations in LeBron James’ first year back in the fold—want him playing through the pain:

Dr. Richard Parker, who is one of the finest orthopedic surgeons in the country, had examined Irving. The early diagnosis was no ACL or MCL tear, the two giant fears when a player drops with a noncontact injury. As for everything else, well, everyone will wait for the MRI. Parker, Irving and (longtime agent Jeff Wechsler) all were on a private jet just two weeks ago, going from Atlanta to Pensacola, Florida, to see Dr. James Andrews the last time Irving came up lame during a playoff game and was worried about what was going on with his knee. That had spooked Irving, and that was a visit meant to gather information and try to put him at ease. […] “It was a little bit different than what I had been experiencing,” Irving said. “[Before,] there was a quick pinch, but I could still feel what was going on in my knee. This time, I kind of knew it was a little bit different [from] the other times.”

Later, Irving’s father Drederick arrived, darting into the emptying room and searching for his son like any concerned parent would. Only minutes earlier he saw Irving need to hold on to trainer Steve Spiro just to get off the court. To leave the floor during a Finals game, his first Finals game, a game in which he’d been playing brilliantly, it was beyond worrisome. […] Drederick, Wechsler and several of Irving’s friends gathered outside the Cavs locker room and began talking with emotion about the situation. Wechsler pulled Cavs general manager David Griffin aside to discuss it.

There’s been some tension between these two sides for weeks now. Irving’s father and Wechsler, sources said, have been preaching caution with Irving and this knee issue. Naturally, they are focused on his long-term health and have concern that playing on a weakened knee — what the Cavs have said publicly was a bad case of tendinitis — could put him at risk of suffering a greater injury. Going to see Andrews was part of the entire group’s efforts to get a full handle on what Irving was facing and get independent advice on the situation. […] Of course on the other side, the Cavs want Irving to play as long as he’s not seriously hurt. As Irving was limping through the start of the conference finals against the Hawks, it was easy to identify some mild friction. As Irving was preparing to get a second opinion, there was a sense he was being challenged to play through it.