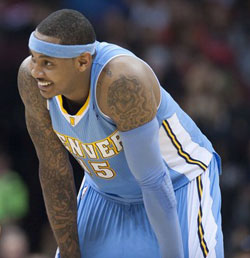 The TWolves may have entered talks with the Knicks and Nuggets in the potential Carmelo Anthony blockbuster deal.

A source familiar with the situation said the Knicks, Timberwolves and Nuggets have discussed a three-team trade that would bring Anthony to the Knicks while Randolph, Wilson Chandler and Eddy Curry’s expiring contract would depart.

[…] In the proposed deal, the Nuggets would wind up with Corey Brewer, Chandler and a Minnesota first-round pick. Minnesota gets Randolph and Curry’s expiring contract. Randolph, whose representatives have requested a trade, has long been rumored to the Wolves for a first-rounder.

Before you say these latest rumors seem a bit too good to be true for the Knicks, remember Melo only wants New York. The Nuggets clearly would like to end this circus and might be getting desperate as the trade deadline’s only weeks away. Minnesota has long been rumored to be after Randolph.

So here’s how things would break down:

The TWolves would be turning a late first-round pick and Corey Brewer (whose contract is up after the season) into Anthony Randolph.

Both Chandler and Brewer are restricted free agents at end of season. Letting one or both of them walk will save the Nuggets plenty of tax money.

And the Knicks… well, they’ll finally have their man.