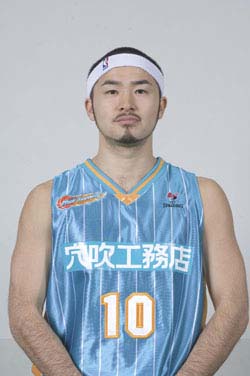 It ain’t where you’re from, it’s where you’re at. For Japanese point guard Kazuyuki “Kaz” Nakagawa, attaining the perfect type of basketball experience meant traveling the often dead-end roads of the American minor league circuit. Currently, finishing out a messy USBL season as the Brooklyn Kings starting point guard, Kaz, 25, is on a mission to make it to the NBA D-league and work to become only the second Japanese player to play in the NBA.

“American basketball is at such a high level and the people here are so hungry to make it, I had to come over here,” says Kaz, who spent last winter with the Takamatsu Five Arrows of the newly formed BJ league, Japan’s first premier professional basketball league. “The league I played in Japan is the top level for players. For everyone in America the ultimate goal is the NBA. I wanted the challenge.”

Growing up in the Japanese countryside, Kaz had few opportunities to play basketball. His twin brother helped him shake his shyness by making him play ball with the other kids. When Kaz was 9-years-old, his grandfather built a basketball court, homemade rim and all, in the harvest fields near their home. Eventually he became one of Japan’s top college players and represented for them in the World University Games. He took his team to the college final four in his freshman year and to the championship game in his senior year. Kaz finished school and was drafted by the Mitsubishi Melco Dolphins of the Japan’s Super League. Instead of staying in his homeland, he decided to take his chances on the NBA dream.

“When college ended a few of my teammates came over to the U.S. to try out for the Long Beach Jam ABA team,” Kaz says through an interpreter while on a visit to the SLAM offices. “Tiny Archibald liked me and it felt great to get hooked-up.”

Though Archibald, one of the NBA’s 50 Greatest Players, took a quick liking to his new point guard, Kaz was competing against another Japanese player at the same position, Yuta Tabuse. The first Japanese player to ever play in the NBA, Tabuse had been the Jam’s point guard in the previous season when they’d won the league championship. With Tabuse’s on the roster, Kaz’s playing time was limited to just 7 games.

Kaz left the Jam and gave the ABA another try in the 2005-2006 season, this time with the now defunct Harlem Strong Dogs. Coached by former NBA player Kenny Charles, The Strong Dogs were owned by Kaizen International, a Japanese sports fitness group. Looking to develop Japanese talent, Kaz was a good fit for New York City and the Strong Dogs. While working on his floor generalship and learning the American style, Kaz was one of the Strong Dogs more productive players through the ups and downs of the second of the franchise’s only two seasons. He finished among the team’s tops in both scoring and assists, nabbing an ABA all-star game appearance. Alas, the story goes, the Strong Dogs never played another game.

“I was impressed by him the first time he came to practice with Harlem and he practically didn’t miss a shot the entire time, he’s a smart player and he does things that don’t show up in the stats,” said Masa Katakai, a former Harlem Strong Dogs executive. Kaz spends a lot of his time in the U.S. with Katakai, a hardcore basketball fan and a sufficient translator. “His goal is to get to the D-League right now and he has the talent to do it.”

In the early part of the 2006 USBL season, Kaz appeared in two games for the Brooklyn Kings, also coached by Kenny Charles. However, Kaz was released and he returned to Japan to weigh out his options. He returned to America to tryout for the Idaho Stampede of the D-League and played very well the first two days of camp. Good enough to make the team, or so he thought. “I scored and passed well. I felt like I did everything. The coach said that I have a communication problem,” Kaz remembers in clear English. While he has studied the English language since he was in junior high school, he has never mastered the conversational level. “The coach asked me a lot of questions the second day that I couldn’t answer. I understand everything he say, but I was just nervous.”

He retreated back to Japan and signed midseason with the Takamatsu Five Arrows. Along with teammate Rasheed Sparks (SLAM readers may remember him from early K1X ads in the magazine) Kaz helped the Five Arrows to a third place finish and to the championship game. While the Five Arrows were soundly defeated by the Osaka Evessa in the BJ-League final Kaz finished with 20 points, 11 in the first quarter, in the effort.

This spring he returned to Brooklyn and spent the entire season with the Kings. On the court against a thrown-together Long Island Primetime team, brought in to finish the USBL east season when it dropped to two teams, Kaz plays a sharp and efficient game. He rarely makes a bad pass or turns the ball over. His sharp command for the ball allows him to create his own shots and work his teammate free for open looks. In 29 minutes, he finishes the Kings final home game with 3 assists, 2 rebounds, 2 steals, only one turnover and 10 points, the last three coming from nearly half court as the shot clock expired. While his confidence in playing in American games is high, his play actually improved.

“Kaz is a team-oriented player who wants to get better,” says Kings coach and general manager Kenny Charles. Charles helped dozens of point guards to solid pro careers and feels Kaz could make the D-league if it were the right situation. “He has a tremendous amount of desire and perseverance and has shown great improvement since his ABA days especially with patience on the offensive end.”

While it isn’t clear if Kaz will get a second shot at the D-League, he doesn’t think he’s wasted any time in the U.S. He was taken in the BJ-League expansion draft and will mostly likely not return to Takamatsu. He hasn’t committed to returning to Japan at all. He’s focused on remaining in America.

“I like American culture, I love hip-hop and that culture,” says Kaz fitting a fresh SLAM cap from New Era to his head. “Playing over here has made me a smarter player and I’m confident in my ability to control the game.”