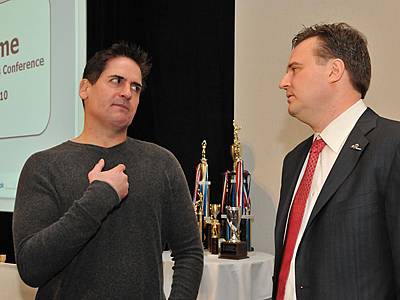 A not-so-cold war continues to wage in Texas between the Dallas Mavericks and Houston Rockets. Forget the battles on the court, the sniping between the two front-offices is much more interesting.

“I think [Cuban’s] pissed that we went after Dirk [Nowitzki] in free agency, however unsuccessful it was,” Morey said. […] “We’ve been pretty good, and I think he’s doing a smart thing to take on a rival,” Morey said late Sunday. “He should want to beat up on San Antonio, too, but it’s hard to paint the Spurs that way. So he’s directed his bully pulpit onto us. Our owner stays above the fray, so I’m outgunned honestly.”

In Cuban’s most recent baiting of the Rockets, he proclaimed that Morey had little regard for player chemistry, relying largely on the merits of math. Morey seethed over the premise and fired back: “I completely reject it.” […] “Our teams have had great chemistry, and it’s something we believe in. Hey, if Mark believed so much in chemistry, he wouldn’t have busted up a title team for cap room. He’s trying to reunite a lot of those people now, bringing back the center [Tyson Chandler] from that title team. Maybe he’s got some chemistry religion recently.

“He’s tripled his analytics staff. If he’s equating analytics with not caring about chemistry, well, he’s tripling down on it. I think he’s smart to paint a competitor in a negative light, but none of those statements are lining up. He says that we’re the team that you sign with and then we will trade you, when that’s what he said he would’ve done with Dwight. We don’t care about chemistry, but he busted up a championship team for what he hoped cap room could do.”