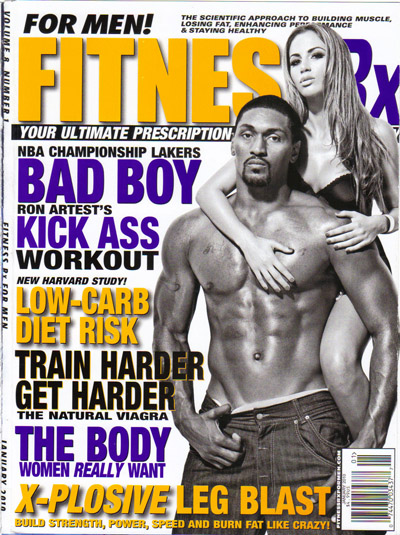 Over the course of the past few months, Ron Artest has been all over the news. For good reasons, not so good reasons and no real reason. And, far as I can tell, as long as Artest’s in Hollywood, get used to seeing his name in your RSS feed.

Ron wasn’t just joining the Lakers organization. He was joining a community of stars and starlets.

A byproduct of Ron Ron’s summer move to L.A.–and in retrospect, probably an intended one–was increased visibility. Everything is magnified in the City of Angels. Everything. Ron, always good for a quote or two and some laughs, has been taking full advantage of the bright lights (or, depending on how you look at it, been taken advantage of).

Ron’s been seen running around in his underwear, alternatively promoting his new songs and his new film. Most recently, Ron parlayed his new celebrity status and pecs into a magazine cover. Fitness RX, “Your Ultimate Perscription For The Perfect Body,” ran Ron Ron with his model chick friend, Nataline Avci. If you were unaware or just forget, Nataline is the same girl that Ron brought with him to an SI interview this fall–an interview that had no scheduled photoshoot accompanying it. Ron’s reason for bringing Ms. Avci? “[T]o have fun.”

When not promoting his offcourt self, or explaining the reasoning behind his latest jersey number or weighing in on Tiger Woods, Artest’s been telling people to blame a non-Championship season on him.

We have eight months to go, but as of a recent interview, if the Lakers don’t repeat  and you want to take Ron up on his offer, blame it on the a a a a a alcohol.

In an interview for an upcoming issue of Sporting News magazine, Ron told a writer–among other things–that “I used to drink Hennessy … at halftime…I (kept it) in my locker. I’d just walk to the liquor store (near the stadium) and get it.”

Other notable clips from the interview include: “When I was a 19-year-old father, whew. I was a single pimp! I was wild. A lot of marijuana and alcohol—even before (that age). … I (still) party and I have fun, but not like I used to. I used to drink every night and party every night;” and “I see Ben (Wallace), I’m on my guard now. I’m always in the mood to fight him. … I’ll get suspended 10 games, 15 games (because) I’ll just fight him right there. It won’t go into the stands.

Less than 20 games into his tenure as a Laker, it’s clear that Ron Artest finally has the audience and spotlight that he’s always desired.

Yes, Ron Ron is ready for Hollywood. The real question is: is the ‘Wood ready for him?