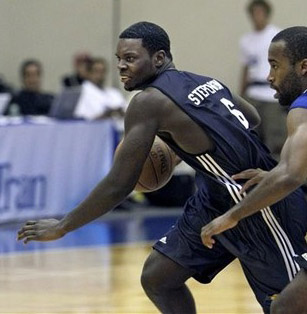 With the NBA season just about two and a half months away from now I decided to take a look at all of the rookies coming into the League this year and analyze each situation independently. As you should be aware, it is possible that a rookie should be playing more than he actually is; sometimes veteran coaches simply like to do things their way and treat their rookies harshly even though they have the talent to be playing (I don’t understand it a lot of the time, but that’s OK).

The following list of players runs through exactly half of the players selected in this years Draft. There is no criteria for evaluation; just a good old fashioned list of players and personal expectations for the year from each one according to their skill set and the situation that they have been placed in.

The top pick in the Draft is the runaway favorite to win the Rookie of the Year award once the season starts; Wall will run the show night-in and night-out in the nations capital. His blinding speed, out-of-this-world athleticism and instincts at the point guard position are unique. In transition Wall will be one of the most dangerous players in the League from the first time he steps on the floor. He changes directions so quickly and with no drop-off in speed that it is almost impossible to guard. During Summer League, Wall averaged 23.5 points and 7.8 assists, both of which were good enough to lead the rest of the field. Look for Wall to run away with this year’s ROY honors because he will be in control of his team from start to finish.

According to the Kings, in his Pre-Draft workouts Cousins was sinking 80+ shots out of 100 consistently while shooting perimeter shots. The point here is that Cousins has the size and skill level to be a dominant player in this league for many years to come. But he needs to stay in shape, stay humble and stay hungry in order for him to reach his potential. For his size, there isn’t much that Cousins cannot do—he is a great passer out of the post or from the perimeter to go along with his developing post and midrange game. Maturing and learning to play night in and night out without getting frustrated will be the keys to DeMarcus’ improvement. Expect him to be in the Top 3 for Rookie of the Year balloting when it’s all said and done.

An extremely talented playmaker who can play positions 1-3, Turner will start from Day One and have the ball in his hands a ton of the time. He had a bad Summer League, where he struggled to score and had a higher turnover rate than assists. No worries, though, as Turner has the skills to be successful in this League and should have a solid year at worst and should be in the running for Rookie of the Year honors for the Philadelphia 76ers.

The Nets are rebuilding and will be starting their new power forward out of Georgia Tech from Day one. Favors should complement Brook Lopez nicely (way better than Josh Boone, shall we say) with his inside-out game, great length, ability to rebound and finish in traffic and his underrated passing ability out of the high post on the offensive end. From the first game of the season until the last, look for Favors to have a more than ample opportunity to fight for Rookie of the Year Honors.

Competition for playing time should be fierce, as the rookie will go head to head with Corey Brewer and Martell Webster. To his credit, Johnson should prove to be the better all-around player than both Brewer and Webster because he is a great rebounder, has the tools to become a great defender, has a smooth pull-up game, is not shy to pull the trigger from deep and is very athletic around the rim. Johnson will earn playing time from the start of the season and don’t be surprised to see him starting by the All-Star break.

The 15th pick out of VCU is raw yet very, very talented. He had an excellent Summer League averaging 13.3 points, 9.3 boards, 1.8 steals and 3.2 blocks per game. Sanders has great bounce to his game on both ends; he has awesome timing when leaving his feet to block shots on defense and offensively he is very active inside and capable of shooting with range out to 20 feet. With a pretty thin frontcourt consisting of Drew Gooden, Luc Mbah a Moute and Andrew Bogut (who should take time to regain his form), expect Sanders to make his presence felt early in the season for the Bucks.

After averaging 15.2 points, 4 rebounds, 2 assists and 1.4 steals per game in the Summer League, Pondexter appears poised to make a nice transition from college to the pros. A prototypical small forward, Pondexter’s game grew on me while watching him in college because he is such a versatile player who takes what the defense gives him on offense and is an excellent defender on defense both on the wing and in the post, using his length and quickness to bother offensive players. With just Julian Wright and James Posey ahead of him on the depth chart, watch for Pondexter to climb his way into the rotation and help New Orleans in any way that he can.

On a team that desires versatile players who are capable of playing both inside and out, Patterson will be a welcome addition. Luis Scola is the starting power forward but bench minutes should be up in the air as Chuck Hayes, Jordan Hill and Patterson should all be fighting for minutes daily in practice. One advantage that Patterson has is the ability to take slower defenders off the bounce to the rim with power, agility and speed. His range and pull-up jump shots were improving while at Kentucky and should help him at the NBA level. Defensively Patterson is strong, tough and willing inside and also has quick feet to guard stretch 4 men.

Playing in the Hoosier state Danny Granger will have mentors at his position as Danny Granger, Mike Dunleavy Jr. and Brandon Rush all play a similar brand of basketball to the tenth pick out of Fresno State. George is a very athletic swingman who, although he still must hone and polish his skills on the offensive end, could prove too talented to just sit near the end of the bench. Expect George to start out the season playing spot minutes for Granger but don’t be surprised to see him starting next to Granger at seasons end.

The Lottery selection out of Wake Forest has a ton of upside because he is so raw offensively and has a great natural feel for rebounding the basketball on both ends. Aminu’s versatility on both ends will be valuable to a Clippers team that desperately needs help at the small forward position. The question for Aminu will be whether he can figure out his bread and butter on the offensive end. If he can add some go-to moves on this end of the floor his value sky rockets, as they already know they are getting a player who is going to hustle, come up with loose balls and score some garbage points around the basket.

On a young team that has slowly added some much-needed girth to their frontline, Aldrich will have to earn his playing time. With veterans Nenad Kristic and Nick Collison providing a steady tandem and youngins BJ Mullens and Serge Ibaka improving daily, Aldrich has his work cut out for him this year but his skill in the post and ability to hit the 15-footer could come in handy for this ball club.

With OJ Mayo attempting to turn into a lead guard, Memphis does not have a player who automatically sticks out at the shooting guard spot which means Xavier Henry will definitely have the opportunity to earn minutes with his ability to bomb it from deep and his natural ability to make things happen off the ball. Henry might not be the most athletic player but he certainly is polished and knows his strengths and weaknesses on the basketball court. He never really presses to get his and should have a solid yet unspectacular year for the Grizzlies.

Babbitt averaged 14.2 points per game for the Blazers in Summer League but did so on a high volume of shots taken from the field. Nonetheless, Babbitt showed why he was taken with the 16th pick in the Draft as he proved he could score from all three levels. For the Blazers this season expect Babbitt to have a chance at major playing time behind Nicolas Batum, as they are alarmingly thin at the small forward position.