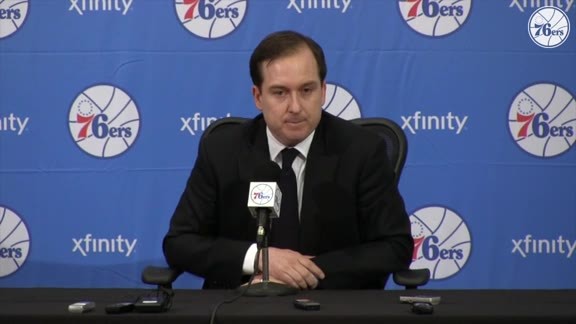 The Philadelphia 76ers marathon rebuilding plan is humming along through its second year. Philadelphia is 12-41, and is going to be in contention to get the top pick in the 2015 Draft. A team with Jahlil Okafor, Joel Embiid, Nerlens Noel, and Michael Carter-Williams on it could probably contend in the woeful Eastern Conference, and if Philly GM Sam Hinkie gets his way, that’s exactly what will happen.

Pablo Torre of ESPN wrote a big feature on Hinkie (with a few SLAM references in fact), touching on his background and the current plight of the 76ers. But while everyone knows Philadelphia is tanking, most people don’t know how Hinkie got the GM job in Philadelphia. He got it, in part, by writing a PowerPoint manifesto detailing every move that led up to the James Harden trade for Houston.

And Hinkie, as if to underscore that divergence, walked into dinner carrying a laptop, complete with a massively detailed PowerPoint presentation that Sixers executives now recall as an “investment thesis.” Its centerpiece was a diagram that illustrated, arrow by arrow, transaction by transaction, how Houston had amassed the assets, two first-rounders and a second-rounder, along with guards Kevin Martin and Jeremy Lamb to acquire superstar guard James Harden from the Thunder in October.