Shaq on Cavs: ‘Best Team I’ve Been on’ 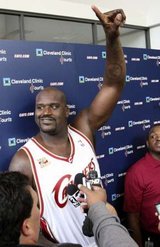 He simply can’t help himself.

Shaquille O’Neal is undoubtedly the greatest self-promoter in the history of the NBA. Which is why no one should be surprised when he makes outlandish statements about whatever team he happens to be on.

He’s a Cav now, so naturally, he thinks — or he says, anyway — they’re the best he’s ever had (a statement coming after a single preseason game.)

The words came easily, without hesitation and seemingly with the thought required before going for the bold splash. In Shaquille O’Neal’s estimation – one based on four championship rings and other honors – he’s found basketball nirvana. And in of all places, Cleveland.

”Like I said before, one through 15, it’s probably the best team that I’ve been on,” O’Neal said. ”I’ve always been on management to get me the shooters I needed and the power forward I needed, but here [we have that].”

There’s no need to go into the details of why the above statement is patently false; that would be missing the point entirely.

At one point or another, depending on who was signing his checks, Shaq has said similar things. It’s an integral part of his overall marketing plan.

He’ll probably end up making the exact same statement a few years from now, about whatever team he ends up joining on the senior circuit.