Six Free Throws and the Weight of the Season 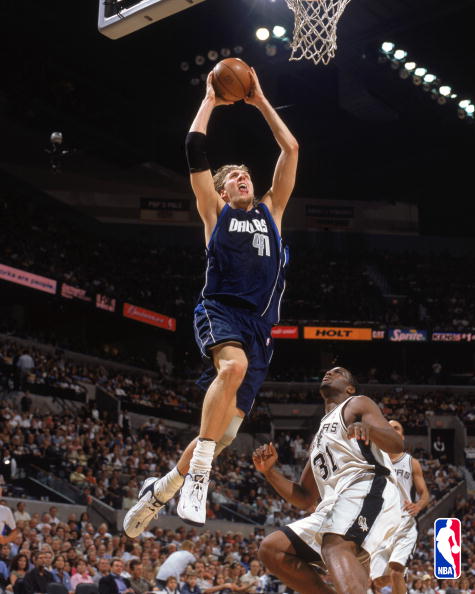 It’s overhyped. It’s completely infeasible 9/10ths of the time and a stretch most of the working 10%. We all want life to imitate those too-uplifting, cheery sports movies, but it usually never happens.

But then I saw six free throws on Tuesday night that meant everything.

They meant a lead. Dirk Nowitzki’s first free throw of the fourth quarter tied the Dallas-Golden State game 112-112 with 48 seconds left and his second gave the Dallas Mavericks their first lead in eight game minutes.

They meant momentum. Dallas then forced a turnover and didn’t allow a basket in the last 3:21. Josh Howard went to the basket on the next possession and demonstrated what Dallas should have been doing all series long.

They meant a little bit of trust. For the first time all series, Dallas started deferring to the future MVP in the waning moments and Nowitzki, in turn responded. Four more free throws and a six-point Dallas lead to finish it off.

Oh, and those six free throws may have meant this 27-year-old German kid’s career.

Nowitzki will always be an all-World player solely from what his natural ability and agility at his height will bring him. But can an athlete ever fully recover from this? Four straight losses in the NBA Finals. A five-game first round loss to an eight-seed in the first round of the Playoffs in your MVP season.

But Nowitzki stepped to the free throw line and finished off his fifth and sixth free throws, his 29th and 30th point – all this after the final two minutes of playing his game and seeing that it led the Dallas Mavericks in an unstoppable 15-0 run — and made sure he’ll never have to worry about it.

And as those MVP chants started to resonated in the American Airlines Center once again, this time – through the triumph of a 67-win season and the adversity of a 3-1 series hole – it finally had the sound of validation.

Here was the reassurance Dirk Nowitzki and the Dallas Mavericks needed. This Golden State team was not too fast to bruise in the paint. This Warrior team was not unbeatable in Oakland. After two big threes, this team is not too chippy around the perimeter to shoot over or beat to the rim off the dribble. This arena is not too yellow, too yellow.

This team, all of a sudden, cannot close out games. This team, after one more ejection and one more foul-out from their two best players, is finally frustrated.

So when Dirk Nowitzki holds the ball at the top of the key and stares down whatever defender is swiping at his shooting hand, with this series, his reputation, his best shot at a championship and his career in the balance, this time he’ll go right to the basket.

Because those six free throws had to mean something.

—-
Or, like Russ, we’ll be talking about this well into the morning.