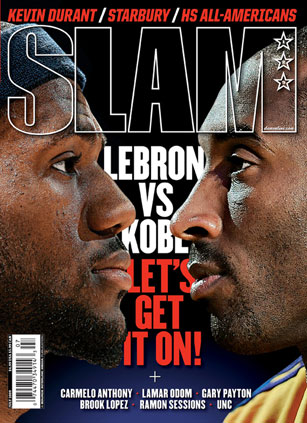 I’ve said it before, but I think SLAMonline has got the best commenters around. Extremely passionate about basketball, knowledgeable and, for the most part, allergic to the hateful vitriol that fills—and ruins—so many comment sections out there. And of course, nothing gets you guys going like a debate involving LeBron James and Kobe Bryant (see Ryan’s Kobe post in our Top 50 and Lang’s MVP vote post for two examples, and even the Tag Cloud at the bottom of every page, which currently shows Kobe barely leading LeBron, 122-120, in posts on which they’ve been tagged on the site). So a big “thank you” to all for you for helping “make” this cover story happen, as it’s the first to be pretty much completely inspired by what happens here on this site.

My goal for the cover story—which should be on stands in New York today and nationally by this weekend—was to make a sort of print comment section, but with the comments coming from experts, who I planned to have be NBA players with a few journalists thrown in. Like, if a bunch of people who play or cover basketball for a living (besides just our man Kevin Love) came to SLAMonline to comment on the following question: Who is the better player right now?

But having people basically admit they were scared to upset whoever they didn’t pick didn’t hurt our enthusiasm for the concept; their reticence to make a call only further illustrated what a valid question it is. And we still got some players to talk on the record, as well as popular TV, print and online analysts and many of the best high school players in the country (who answered so seriously; you can tell they study these guys as close as anyone). We went with this comment angle for the story in the magazine because we thought it was the best way to cover something that hasn’t happened yet, and we headlined the story “The Great Debate,” which we came up with before we knew of either the cool Vitamin Water campaign or the ESPN/NBA TV production of the same title I hear will be airing any day now.

The cover line, “Let’s Get it On,” alludes to how, regardless of the way we package this thing in the magazine, the time is right to settle this on the court. I don’t just think Cavs-Lakers is “meant to be” in the is-the-NBA-in-cahoots-with-ABC-to-make-this-happen? sense (though it is that, too), but that the time is exactly right to see these guys go head to head for a couple titles (the League’s championship, as well as the unofficial Best Player in the Game honor). Which leads to the other rationale: the time for this cover was pretty much now or never. Before this season, LeBron was still an indifferent defender. Meanwhile, after this season, it’s fair to expect some slippage from Kobe as his body continues to absorb punishment. Yes—LeBron will probably get better and Kobe will still be amazing. But they will probably not ever be as close to their respective peaks at the same time as they are at this very moment. I don’t even know what part of me wants to see this more: the fan or the editor. And, from a business sense, despite the ad campaigns that are starting to brew and the debate that has raged in this corner of cyberspace for more than a year, we’re actually still early with this cover. But that won’t last. I expect the second these two clinch their spots in the Finals we’ll be seeing them on more covers than Barack Obama.

The proverbial elephant in the room with this cover, which I talk about in my editor’s letter, is the chance that these two don’t meet in the Finals. I’ve already had some nervous moments (game 1 in L.A. had me sending Lang anxious text messages, and these Nuggets will make things very interesting), but the Cavs and Lakers are still prohibitive favorites and I really don’t foresee having to do something like this again. If I did, as awkward as it would be, the truth is that LeBron and Kobe’s supporters would probably still buy this cover and state their case, but for now I display this with the confidence that it is the right cover, at the right time. Now go buy it!