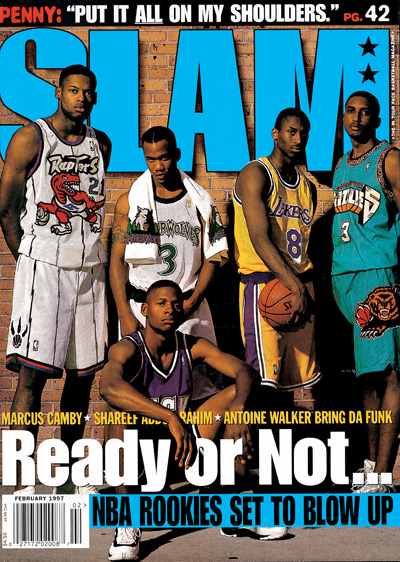 The 6th Man: “What’s up cool? I haven’t seen you since high school, if you know what I”m sayin’.”

This is how Kobe Bryant greeted me when I ran into him in Florida a couple of months ago. As I reminded him then, he woulda called me “Sir” just a year earlier. (And no, I didn’t know Kobe in high school. I’m old enough to be his…uh…older brother.)

Kobe’s growing up. And, slowly but surely, so are the rest of the rookies. Just in time, too. Gone forever are the days when a 22-year-old man finished up his four years of eligibility and headed into the league, physically and mentally ready for a grueling schedule. This rookie class is filled with juniors, sophomores, freshmen and high school seniors who, for the most part, lack the complete package of skills you need to survive in the “L”. That’s okay, though-last year’s rookies are still learning how to play, too.

On the other hand, folks can argue that on NBA rosters, they can learn from the best, and thereby get better faster. Need help with your jump shot? Ask Glen Rice after practice. You wanna learn how to play man-to-man D? Well, son, Mike Fratello’s right over there.

Whatever. All I know is this: The ’96 rookie class is brimming with enough talent to keep the league running smoove for years to come. Steph. Answer. Marcus. Future. Ray. ‘Toine. Kobe.

In any case, we’ve let the SLAM braintrust take some educated guesses as to how the season’s gonna play out for the NBA’s newcomers (pg. 72). Most likely to average 20 ppg. Most likely to piss off Jordan. Most likely to ride the pine. Stuff like that. If you wanna make your own list, just send it in a.s.a.p., and we’ll print the best of ’em in the coming issues. And feel free to make up your own Most likely to’s…

Most likely to get dunked on by Lamar Odom (pg. 101) next season.

Now that’s what I wanna know.

P.S. Yes, it’s true, the SLAM dome has been wired for e-mail. Feel free to drop any of us a line. Comments, questions, complaints, whatever. My address is tonyg@harris-pub.com. Anna’s is annag@harris-pub.com, and you can get in touch with Russ at russb@harris-pub.com. Scoop doesn’t have e-mail, but he says you can call him at home. Preferably real early in the morning. His number is…just kiddin’ Scoop. Again, peace.