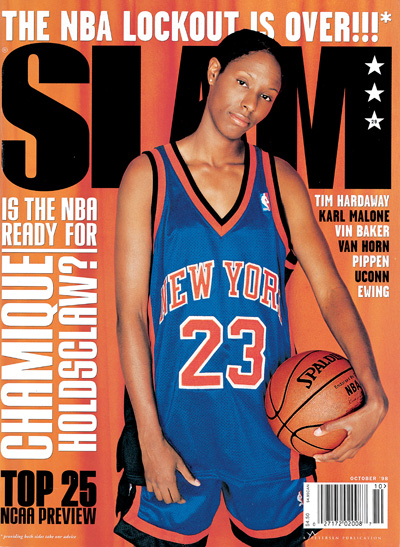 The 6th Man: Yeah, I can hear you laughing, even from deep within the bowels of the SLAM Dome. Putting Chamique Holdsclaw on our cover, saying that she might—through sheer force of will and an uncanny knack for being around the ball—squeeze her way into a league crowded with bigger, stronger, faster men is just ridiculous, right? As a matter of fact, even the writer (Michael Bradley) didn’t like the idea. It wasn’t until we threatened him with the “I was Vernon Maxwell’s teenage bride” fictional essay that he came on board.

I can’t blame Bradley; he’s a realist’s realist. And on paper, ’Mique gets chewed up by every 2 or 3 in the NBA—even Calbert Cheaney. But the next time a game gets decided on paper, please let me know.

So keep laughing. ’Mique doesn’t mind. It’ll make it that much sweeter when she defies expectations for the umpteenth time in her life. And if she never does, if the men just keep growing bigger and stronger and faster, preventing her from catching up, it’s still gonna be fun watching her decimate those female leagues.

Without heaping tons of superlatives on her already-burdened shoulders, Chamique Holdsclaw is the real deal the way Cynthia Cooper is the real deal and the way Cheryl Miller was the real deal. ‘Mique handles herself with a tremendous amount of poise and humility, which is remarkable considering folks are all up in her face, trying to affix themselves to her star ascendant.

It’s my hope that the cover concept does not overshadow the fact that we are finally putting a female baller on SLAM’s cover. After 29 issues, it was certainly time. For whatever it’s worth, we were just about to pull the trigger with Nikki McCray last year, before she turned into a castmember of Fame. After that, it was ’Mique and only ’Mique.

And while she’ll likely end up on the WNBA’s Lobotomized New York Liberty after her senior season at UT—just a hunch, mind you—you never can tell where Chamique’s gonna be in five years.

Take another peek at the cover.

P.S. If you are a rabid UT fanatic and strongly object to our cover (and if your name is not Pat, Micki or Kellie Jolly), please mark your envelope N.U.T.S. (which stands for Non-Understanding Tennessee Supporter), so we can make sure that your letter goes to the right place. Thanks.