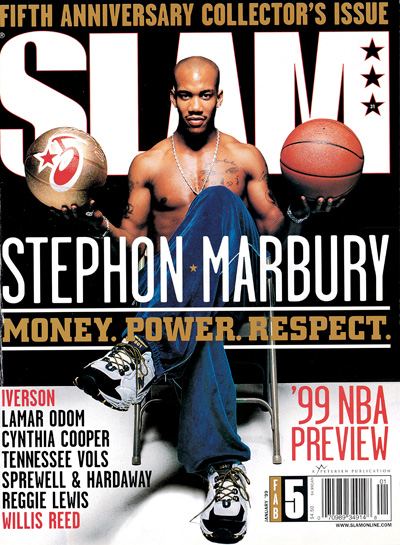 The 6th Man: By anyone’s standards, a lot can happen in five years. These days a player can go from high school to the NBA All-Star game in four. (Soon it will be three.) So too, a magazine can make quantum leaps in relevance as soon as it discovers its identity.

Our watershed moment occurred around the time of SLAM #4. If my memory serves me correctly, we were tossing around ideas for the cover and very commercial players like Charles Barkley and Karl Malone were being seriously considered. It was a scary time at SLAM—Mike was retired, you remember—when we thought one misstep could be our last. Safe seemed like the right play, given the circumstances.

Still, like in one of those corny-ass TV movies, we took a deep breath and decided to forego logic and take a chance on two guys who we really thought exemplified the spirit of basketball: Tim Hardaway and Latrell Sprewell. Nice & Smooth. The once and perhaps future teammates.

If we were going to make any real impact with this magazine, I reasoned to my boss Dennis—who was screaming on me like Bobby Knight for being so cavalier with the company’s scrilla—we would have to show some stones. I knew (read: I hoped like hell) there were real basketball fans out there and that they would respond.

You have. Over the past five years, you have proved that the real spirit of basketball isn’t confined to NBA arenas and TV studios filled with tiny, yammering announcers. It’s anywhere there’s a rock and a hole. Read “Tougher Than Leather” (pages 102 through 106) about some high school girls res-ballin’ their way through adversity to another state title. It’s right there.

The decision to put Steph on the cover was easy. As Scoop pointed out in “Starchild” (pages 58 through 62), no player better exemplifies the spirit of this magazine. Not to mention, Steph’s been down for the cause since the beginning and has always gone out of his way to give us something extra in our interviews and photo shoots. The cover pose was his idea. Shows you what can happen when you spend some time chillin’ with Iceman, as Steph has recently.

That’s it. Hopefully the stupid lockout will be over by the time you read this.

P.S. For whatever it’s worth, back issues of SLAM numbers 1 through 18 are completely sold out. So please don’t call me lookin’ for them. I always feel bad when I can’t hook you up.