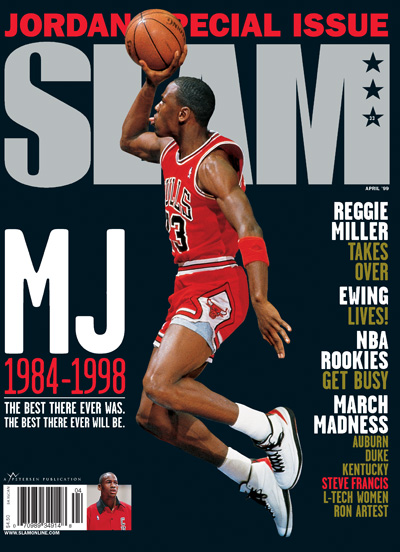 There was a time when the thought of Reggie Miller on SLAM’s cover would make my skin crawl like one of Greg Minor’s illegitimate kids across a linoleum floor. That time, you should know, extended up until about three weeks and four days ago, when I was forced to confront my demons and admit that it was the Knick-killer’s time to shine.

During the weeks we were negotiating to shoot him, I was having horrific nightmares of what the cover could turn out to look like. The bald head. The smirk. Those skinny legs. That ugly uniform. Maybe a “choke” sign. Ugh. In my dreams, I would be at the photo shoot, and Reggie would be wearing a beret and laughing at me. (Sometimes I’d try to imagine that Sprewell was with me. And Reggie wasn’t laughing anymore.)

The thing I couldn’t escape, however, is that this cover is the absolute right thing to do. The Indiana Pacers, in our collective opinion, are on the fast track to NBA titledom. And after Reggie’s heroic performance in the Eastern Conference Finals last season, he turns out to be the next best story now that the first best story has retired to the links. As much as I hate to admit it—and believe me, my hatred of Reggie Miller is/was no act—Reggie Miller’s the greatest money player left in basketball.

I repeat: The greatest money player left in basketball.

Please, for godsakes, someone wake me up.

P.S. This photo is my pathetic attempt to feel better about the cover. Sorry.
P.P.S. Good-bye, M. Thanks to the nth power for all you’ve done for hoops.