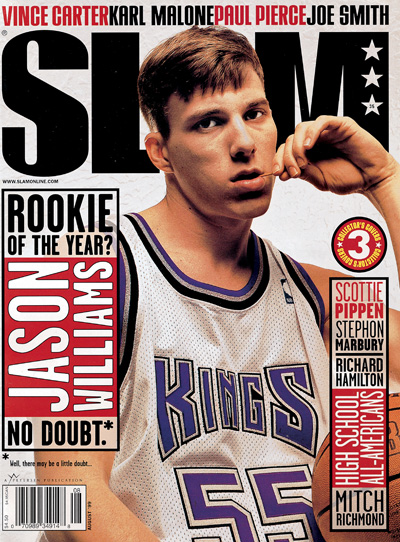 The 6th Man: As you can imagine, the office has been pretty much consumed by the Rookie of the Year debate. Death threats, bribes and various forms of intimidation have become commonplace in the weeks leading up to publication of this issue, and still some bitterness lingers. (Whoever cut Alien Iverson’s arm off is gettin’ whupped, m’kay?) That’s fine: we’ve survived a brutal lockout and Kendall Gill’s golden tresses, we can make it through this bit of turbulence standing on our heads.

More than the MVP award, which has been pretty locked-up for the past decade, the ROY Award is usually up in the air until the last few weeks of the season. (With the exception of when guys like Tim Duncan and, you know, Shaq come out of college.) Forget apples and oranges—most years we’re supposed to choose between Tropicana and Sunkist. Well, after a few weeks of mental gymnastics, we did. And you probably disagree. Vehemently. That’s cool. Free country and all.

The three covers are our way of saying just how close the race was, of showing respect for the trio of talented and impactful rooks. Believe me when I say that what separates the winner from the non-winners could fit into one of Earl Boykins’ baby shoes. And what kept other first-year success stories—most notably Mike Bibby and Matt Harpring and the fellas from Houston—from getting their shine is even smaller. But, it’s not like we could do six covers or anything.

At least not this year…

P.S. Thanks to all of the photogs, team PR people, agents and athletes who made the covers possible.