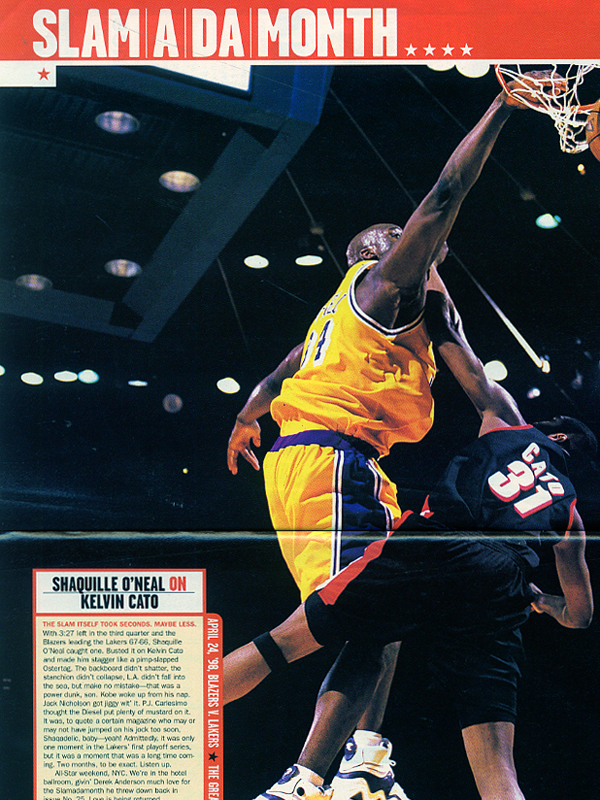 The slam itself took seconds. Maybe less. With 3:27 left in the third quarter and the Blazers leading the Lakers 67-66, Shaquille O’Neal caught one. Busted it on Kelvin CAte and amde him stagger like a pimp-slapped Ostertag. The backboard didn’t shatter, the stanchion didn’t collapse, L.A. didn’t fall into the sea, but make no mistake – that was a power dunk, son. Kobe woke up from his nap. Jack Nicholson got jiggy wit’ it. P.J. Carlesimo thought the Diesel put plenty of mustard on it. It was, to quote a certain magazine who may or may not have jumped on his jock too soon, Shaqadelic, baby—yeah! Admittedly, it was only one moment in the Lakers’ first playoff series, but it was a moment that was a long time coming. Two months, to be exact. Listen up.

All-Star weekend, NYC. We’re in the hotel ballroom, givin’ Derek Anderson much love for the Slamadamonth he threw down back in issue No. 25. Love is being returned. Everything is lovely. Up steps Cato. “SLAM? Man, they said I wasn’t gonna shoot 50 percent from the field. I can’t get with them.” Or something to that effect. We could have responded in any number of ways. The obvious would have been to write K-Slice a polite letter following the season: “Dear Kelvin, Sorry we offended you by saying you would shoot under 50 percent for the season. We didn’t realize you would shoot under 45 percent (42.8, to be exact), or we would have made that clear. Love, SLAM.” But no. That would have been too easy.

So, we parted with DA and went looking for Shaq Daddy, who was gettin’ heavily Ahmaded by Bill Bellamy. “Yo Shaq, you gotta get me in your next movie! Steel was the bomb, yo! And Kazaam? Mad underrated. They don’t even know…” Finally, BB stepped. We sat.

“‘Sup, Shaq? Yo, see Kelvin Carter over there? He’s been talkin’ mad shit about you over there. Sayin’ you can’t act, can’t rap, and that he’s a better free-throw shooter than you. You believe that? He even said Kobe got better flow than you. Much better, as a matter of fact. No, big fella, not now. Get him later, Dog. The playoffs, on national TV. Show him how you do.”