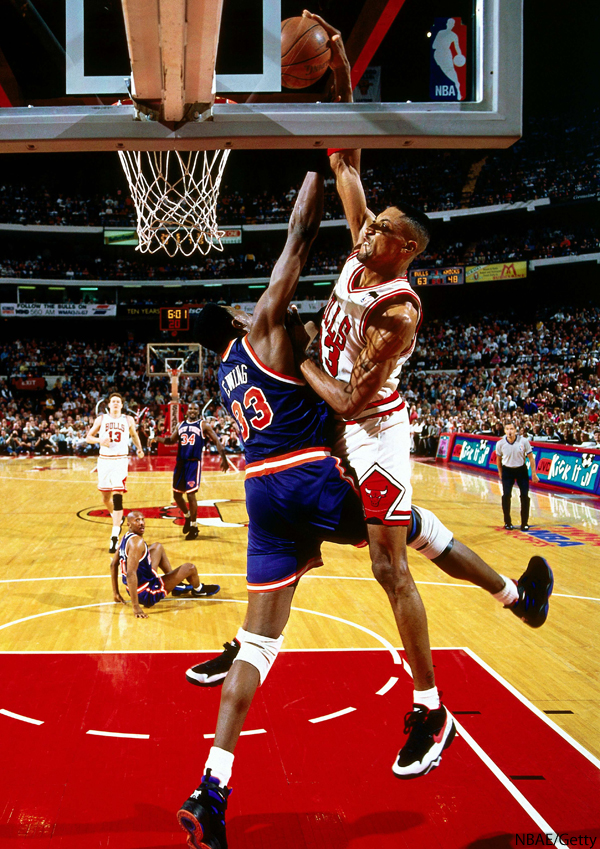 It was a mad scene on Madison that night. The same set of characters were all there—minus, of course, the best player to ever play the game: a guy named Michael Jordan. The brusin’ Knicks were leadin’ three games to two, and so da Bulls needed this game real bad. Scottie Pippen had been on a mission to show everyone—especially MJ—that he was the man on this Chicago team.

And so…Horace Grant blocked a Charles Oakley feeble attempt at a layup—the Oakman has the vertical of an elephant—and the ball kicked out to BJ Armstrong, who was runnin’ up the left side. With the heavy-handed Derek Harper stepping in front of him, Armstrong threw a deft bounce pass from the left of the key across the lane to Pete Myers, who, in turn, bounced it back across the lane to a streaking Pippen. (Meanwhile, Starks was sprawling and Harper was checkin’ his jock for burn marks.)

Where was Patrick Ewing in all this? He was running down the lane, waiting for Pippen. Scottie caught the rock and elevated toward the rim. The Stadium crowd buzzed in anticipation. Pippen threw down a cold hard one over Ewing, sending the Knicks center sprawling to the floor. As if to punctuate the move, he stood over Patrick. And Patrick, on his ass, took exception to this and swiped at Pippen. The crowd went bonkers. Spike Lee went bonkers. And for a brief moment, the fans almost forgot what happened three games earlier, with two ticks left.