Some People Call Him Maurice 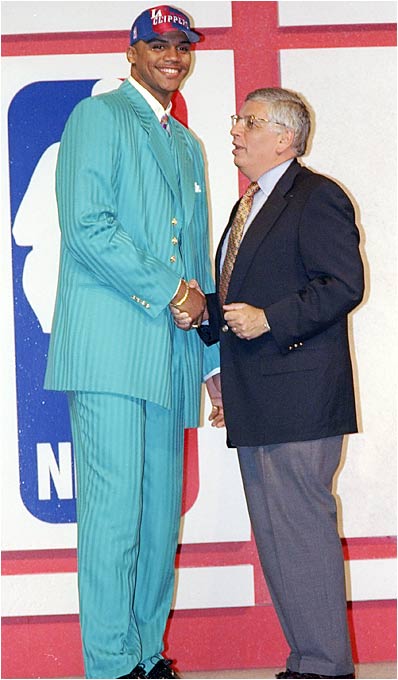 Before I get started here, I’d just like to mention that the New York Post site redesign is absolutely horrible and user-unfriendly. Whoever’s responsible should be shot.

So yeah, Maurice Taylor is most likely getting bought out by the Knicks. He’s in the last year of his contract anyway—on the books for a bargain $9 milly—but if the Knicks DON’T buy him out, it’s likely he’ll be stuck in New York until the February trade deadline. Most likely sitting on the bench in a pinstriped suit. No one wants that.

Of course Taylor’s decided that the best way to get his buyout is to badmouth his employers, who he averaged 6.3 points and 3.4 rebounds for last season in 18 minutes a game. “First and foremost, we’re a bad team,” Taylor told the Post. “Let’s get that out of the way first. [Really Maurice? You want that to be first? You got it!] It’s not all of a sudden we weren’t winning. How did Don Chaney do? How did Lenny Wilkens do? How did Herb Williams do? It’s not like we were just bad lately. So I don’t look at it as Larry failing miserably.

“The most surprising part is they fired him with so many years left on his contract. And he’s also a Hall of Fame coach.”

This statement was shocking, in the sense that Taylor actually remembered that Don Chaney used to coach the Knicks. It was also savvy, as he failed to mention that team prez current coach Isiah Thomas didn’t exactly jump to save Brown when Jimmy Dolan pushed him under the bus. He managed to dis the Knicks without laying blame on, well, anyone. You know, just in case he ever plays for any of them again. No point in burning bridges.

Thing is, Mo’s a well-spoken dude who had a great seat for much of the Knicks disasterpiece last season. He knew what was going on. And as one of the three Michigan guys (along with Jamal Crawford and Jalen Rose) and one of the most experienced vets on the roster, he seemed to provide some real guidance in the locker room. He wasn’t the player he was when he averaged 17 ppg for the Clips back in ’00, but he provided decent spot rebounding and post scoring in the few minutes he got. He’ll definitely be able to help someone if he gets cut loose. And he could even fill a bigger role. Not that he’s mad about it or anything.

“They’re not trying to spite me [by not playing me],” he told the Post. “I’m not saying what they’re doing is a bad thing. But it’s bad for me. I’m a much better player than what you saw in New York.”

We’ll most likely see about that.