“Some People Graduate But Be Still Stupid…” 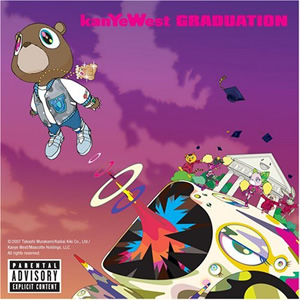 By now everyone has heard Ye Tudda’s latest tantrum and probably dismissed him as a narcissistic malcontent. Again. Initially, I was also disappointed in his behavior, I mean who gives a f*ck about a g*ddamn MTV award? (Word to Chuck D…) But three words of that rant should resonate with anyone who still loves hip hop and G.O.O.D. music in general. “I’m trying hard.” Not, “I’m just doin’ this sh*t to move a few extra units and pay some bills.” or “I’m just doin’ this to keep my career alive.” He tries. Hard.

Much of the musical landscape-especially in hip hop-is littered with tripe that further dulls our senses and diminishes our expectations with each hackneyed and uninspired release. Ye could easily maintain the status quo and still do his numbers, instead he consistently challenges himself not only as an artist, but as a competitor. The greats who preceded Yeezy didn’t only instill in him a love of the game, they inadvertently challenged him to stretch its boundaries. Kanye’s insistence on honoring the games foundation while defying its modern conventions has established a new sound and a renewed an old adage. “Do you.”

In the beginning Ye was chastised by those who noted the aesthetic differences between him and his contemporaries, but now more are asking that his contemporaries duplicate his effort. Today Kanye West has risen to the top of a field that belies his background, however his work is still overshadowed by a common distaste for his personality, particularly his ego. But that ego is the byproduct of a resilience that was necessary for him to continue doing what those around him said he couldn’t. Or shouldn’t. That ego has become the idea that his best work is always in front of him. And that is why I’ve got love for Kanye West. He strives for greatness in a genre that rewards mediocrity and while he may never get the respect he feels he deserves-and he’ll be sure to let us know about it-ultimately, it only adds fuel to a fire that we all benefit from. He kinda reminds me of another College Dropout….