Speak With Your Game 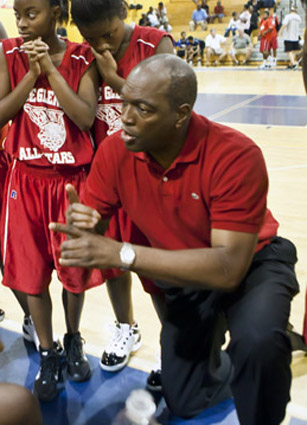 Klarissa Weaver-Fudge furiously swipes an index finger at the back of her right ear in the direction of the referee, which is sign language that she wants a foul called. Weaver-Fudge was hacked under the basket, but the deaf referee, Alvin Williams, allows play to continue. When he ignores her plea, she thinks he must be blind, too.

She spreads her arms wide in a last, desperate petition, which you don’t have to be deaf to understand: “Are you kidding me, ref? That was a foul.”

It was just as unsympathetic in the boys’ game at the other end of the floor.

The player nicknamed Big K has cleared a path to the basket with his brawn and created a casualty. A defender lies on his back under the rim while Big K, Kelly Sanders from the Pennsylvania School for the Deaf, kisses the ball off the glass for two. The culture of the game is established and the next few possessions in the 3-on-3 game include floor burns, arm bars in the back and a cold stare.

At mid-court, Willie Brown, a camp counselor and a former DI player at Hofstra and Georgia State, looks at Mike Glenn, the camp director, and makes a sign that deaf basketball players come to understand. “Willie says you can’t be soft,” Glenn says. He nods back at Willie. “We give it to them straight.”

Glenn, who played 10 NBA seasons (’77-87), has been running his Camp for the Hearing Impaired for 32 years, the last 30 in Atlanta. The week-long camp has been a sanctuary for almost 3,000 kids, a colony of campers who are made to stand and push back.

It is like a lot of summer basketball camps. There is the squeaking of shoes on the hardwood and the steady cadence of bouncing balls. There is the hum of oscillating fans to ease the swelter, and there is the grit and determination that goes with single-elimination when the 3-on-3 tournaments are held on the last day.

But there is no chatter, no blather, no chirping. It’s quieter than your average camp, but not tamer. There are usually no whistles for these games. If the referees had whistles, they might not use them anyway. The refs windmill their arms frequently, which the players know as “play on,” and sometimes wave a hand towel to get the players’ attention.

“They play a rougher game here than the hearing girls,” says Weaver-Fudge, a rising junior at Miller Grove High School in Lithonia, GA, who attends the camp because her parents are deaf. “I’m pretty used to them beating me up, so when I go play with my hearing team, I can take a lot of stuff. The girls here are really aggressive and motivated. They want to show what they can do.”

The kids, ages 14-18, come from all over the US to do just that. The majority of the campers go to state-sponsored schools for the deaf, which is why Glenn began this march three decades ago.

His father, Charles W. Glenn Sr, was a World War II veteran and math teacher, but also the volunteer basketball coach for the Georgia School for the Deaf in Cave Spring, GA, from 1952-70. More specifically, Charles Glenn was the coach for the black deaf school. When the school was integrated with the white deaf school, it was the white coach, of course, who got the head coaching job.

His father retired from coaching in 1970, but not before Mike bonded with the deaf kids. After school and on weekends, he would jog down a country road one and a half miles to meet his father and the team. Glenn would follow his father around to tournaments with the black deaf kids and marvel at the resiliency of boys who were segregated from life’s mainstream by color and by disability.

“Those kids taught me to compete, and they taught me about humanity and caring and sharing,” Glenn says. “I was this hearing kid, but I would eat lunch with them and go on trips and they would always wave at me as if to say, ‘C’mon, come with us.’”

To have Mike Glenn as your friend in those days was precious. He was deemed the best basketball player in the state of Georgia (1973) and averaged over 30 points a game for Coosa High School, the public school team in Rome, GA. Glenn had perfect attendance in school for 12 years and was so admired that a local family named their son after him while Mike was a mere teenager.

Glenn’s idol was Walt Frazier, so naturally he ended up at Southern Illinois (1973-77) where Frazier had been a three-time All-American. A 6-2 guard, Glenn was drafted 23rd overall by the Chicago Bulls but broke his neck in an auto accident a few months after the Draft and was released. He recovered and played for the Buffalo Braves, New York Knicks, Atlanta Hawks and Milwaukee Bucks.

Basketball is not Glenn’s only passion. Now 56 years old, he is a collector of African-American artifacts and has written four books. He also does post-game analysis of Hawks games for Fox Sports South, which helps maintain connections for his camp.

Doc Rivers and Tiny Archibald have worked with his kids at the camp, as have former Atlanta Brave David Justice and Falcons All-Pro receiver Roddy White. Dominique Wilkins and Tree Rollins have counseled kids at the camp and NBA referee Eddie Rush tried his hand at whistle-less refereeing. The list of benefactors goes on and on.

It is not the famous who make the camp hum, but the devotion of people like Phil Merlino. He is a teacher at the Pennsylvania School for the Deaf and has been working the camp for 30 years, even though his wedding anniversary usually falls smack in the middle of the camp.

The camp thrives because it makes demands on these teenagers and is not another warehouse. It is basketball played with the same intensity as in the hearing game, and coaches in the camp for hearing impaired players are just as likely to react with scorn to inefficient play.

“Did I just see a screen? No way,” yells green team coach Lewis Dow during the championship game. Dow, a project manager and, once upon a time, a walk-on at Temple, brought his son from the New Jersey School for the Deaf.

“I saw a screen yesterday. Did I just see another one today?”

Dow was not talking to himself. Players can have cochlear implants and several more are CODA, Children of Deaf Adults. He moves closer to a deaf player to try and convince him with sign language to overplay the right hand of the opposing team’s point guard because the guard cannot go left.

Communication on defense would seem to be an inherent problem for these players, but think about the boisterous crowds in the hearing game and the noise level. Who can hear everything during a game? Besides, a lot of communication in basketball is non-verbal.

“They have been deaf most of their lives so they don’t have to depend on people to call out screens,” Glenn says. “They have good peripheral vision, and they are always looking. They have better court awareness because no one is yelling, ‘Yo, man, screen comin’.’”

In other words, deaf players have to look both ways and guard their own.

Glenn’s camp, of course, is more than basketball. There’s frustration that goes with being deaf. Communication problems and real-life drama have to be worked out…or not.