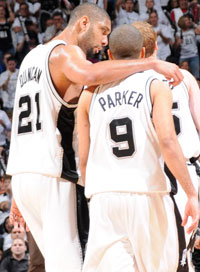 Fiesta San Antonio is an annual event spanning eleven days that is all about celebrating the rich and diverse cultures of the city for which the festival is named. The Fiesta features over one hundred different events and draws more than 3.5 million people to the city to take in the sights and sounds that this Texas landmark has to offer. The event which began on April 16th, will conclude on the 26th of this month.

Game two between the Mavericks and Spurs was all about celebrating the rich and diverse offensive arsenal that Tony Parker has developed during his seven years in the NBA. San Antonio’s floor general decided to put things away early by notching 27 first half points, scoring in seemingly every way possible. His signature dribble drive game was on display early, slicing up the Dallas defense with effortless ease. It was no secret coming into this series that no one on the Mavericks roster could consistently stay in front of Parker, but tonight they couldn’t even stay on Parker’s side, he was simply that good. When he started to bust out the mid-range game, it was clear this wasn’t going to be Dallas’s night, as he shot a scorching 12-16 from the floor in the half.

The fact that San Antonio went ahead by double figures in the first quarter in such convincing fashion had to be a major sigh of relief for Spurs fans. C’mon, after Dallas rallied from 11 down to win Game 1 on the road, even the most confident fans had to think for at least a brief moment, “Hmm, the Mavericks might do it again this year.” Not to say that they won’t, but San Antonio certainly sent a message in this win.

Equally as impressive as Parker’s one-man offensive onslaught was the Spurs tremendous team defense. The box score says that Dallas shot 40 percent from the floor, but that was courtesy of garbage points in the waning minutes against the San Antonio reserves. How’s this for smothering: Dirk Nowitzki, Jason Terry and Josh Howard combined to shoot 12 of 37 from the floor. Terry, who finished with 16 points didn’t get his first points until the 1:56 mark in the first half, and Dirk scored 8 of his 14 points from the foul line.

The Spurs wing players did an outstanding job of pushing out on the Mavericks shooters, preventing really any open looks for the majority of the game. Dallas committed two shot clock violations on possessions in which they simply kept swinging the ball around the perimeter, unable to get an open look and unable to penetrate.

While the story on Saturday was the effectiveness of the Dallas bench, Game 2 was all about the Spurs role players. Matt Bonner was huge, yes huge. The big man hit the glass hard, but more importantly spread the floor in ways he was unable to in the Game 1 loss. Drew Gooden was a major energy boost off the bench as well, I can’t believe he only wound up with three boards! If players were given credit for .5 rebounds on a tipped ball that kept a play alive, Gooden would have easily gotten two of three more boards tacked onto his total.

This game was over by the half. Sure San Antonio only held a 57-46 lead, but watching this game, it felt like so much more than that. The lead didn’t balloon to 20+ until midway through the third quarter, but it always felt like the Spurs were blowing away Dallas in this one.

Dirk look frustrated, I mean really frustrated all game. Aside from a quick drive down the lane in the second half, he didn’t see an easy look all night. If he was on the perimeter he hand a hand in his grill, if he came inside there was a body or two ready and waiting for him.

Josh Howard did something that I haven’t seen from him in a while, he pulled a vanishing act. After going for 25 in Game 1, he took 8 shots and looked as though he wanted to take even less than that. Of course some of it was due to the Spurs D, but Howard looked indecisive and unsure of himself. He hesitated several times on what should have been open jumpers, but instead became lost opportunities.

To be frank, the only real encouraging sign from Dallas all night were the hustle plays on the offensive end from Erick Dampier. After playing a season high 39 minutes on Saturday, no one would have been shocked to see the Mav’s center come out a bit sluggish in this one. Granted, he only played 22 minutes, but he ran the floor well for a few easy finishes.

Ultimately this night wasn’t about what Dallas didn’t do, but what San Antonion did do. Tim Duncan had a rather quiet 13-point, 11-rebound double-double, but Mr. Longoria stole the show. Parker finished with 38 points (3 off his career playoff best) to go along with 8 dimes. More amazing than that was the fact he did it on 16-22 shooting and in just 32 minutes. 32 minutes! The dude played less than three-quarters and scored nearly 40 percent of his team’s points.

So while Fiesta San Antonio rages on, Tony Parker’s offensive festival has put the Spurs right back in the drivers seat as they head off to Dallas for Game 3.