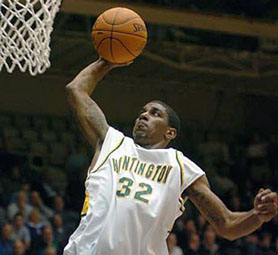 I spent a lot of time a few years ago stalking LeBron James — with his knowledge, obviously, and with something resembling a good reason — and one of my most vivid memories from that surreal time came in Philadelphia, PA. Scary as it is to think of, this was December of ’02, and LeBron’s high school squad was in Illadelph to play Strawberry Mansion HS, then led by the city’s soon-to-be all-time scoring leader, Maureece Rice. Then-Sixer Allen Iverson and then-high school junior Sebastian Telfair both crowded into the Palestra for this one, which ended up not being much of a game, but nonetheless a memorable event.

I stayed at the Doubletree in downtown Philly that night, and I remember, either right before I left for the game, or maybe after I got back to my room, the TV was on Headline News, and they actually had like a 45-second story on OJ Mayo, already being dubbed “The Next LeBron.”

He was in eighth grade at the time.

I bring this up because I also remember thinking, with a great deal of certainty, that sh*t would never get any crazier in high school basketball than it was right then and right there. I mean, I was following a high school kid halfway around the country, for god’s sake, and a junior high kid was getting talked about on national cable news. I still think I was right, but OJ is making it really hard for me to be sure…

I first met OJ at ABCD Camp in, I think, the summer of ’04. Actually, it might’ve even been ’03; I just know he seemed both way too mature and way too talented for his age. For both reasons, I pretty quickly started comparing him to Kobe Bryant, who, as most of you know, I consider a really good basketball player, and a really interesting guy. Not long after that, I went out to Cincinnati, where OJ and Bill Walker had moved, for reasons not entirely clear, to play together at North College Hill HS.

Impressions? Bill doesn’t talk much, but his mom makes really good mac ‘n’ cheese, and he might be Vince Carter’s evil twin — in a good way.

And OJ? In some ways, he was more like Kobe than I imagined, namely in how insanely focused he seemed to be on his goals and how he measured up against great players. He was the kind of kid — which, I promise, is mad rare with top high school ballers — who would actually ask a reporter questions, about what I thought of other players and what made certain guys so good. Also, he’s one of the most cold-blooded competitors I’ve ever seen on the high school level, maybe even more than KB was on that level, which is saying a lot.

But, obviously, he was pretty different from Kobe, too. Their upbringings were polar opposite, and where Kobe seemed, certainly at that age, pretty untouchable off the court, OJ always had a rumor swirling around him. There was a lot going on there, mostly good, but with the undeniable potential for bad.

And now, with his prep career all but over, OJ Mayo has resolved exactly none of the questions about how the whole good v. bad is going to turn out. He’s still really, really, really good on the court, but because of some apparent knucklehead tendencies, and because he was so good so soon, a lot of people are ready to write him off as overrated and not actually that good at all.

Those people are wrong. I promise. OJ’s game is stupid, complete and lethal, and I’m absolutely convinced that Pac-10 defenses and the rest of us spectators will find this out starting in November.

That is, assuming he’s on the court.

It’s crazy, and sad, that there’s any question about any of this, but here we are. The NY Times story that dropped this week about how OJ basically sent his “guy” to tell Tim Floyd he was gonna go to USC is hard to believe, unless you’ve met the kid; strangely, knowing his situation, it kind of made sense to me. Just keep in mind that this might not be half as crazy as what a lot of people thought OJ might be making news for right now — those rumors that he was gonna sign a sneaker deal and play overseas for a year, or sign a sneaker deal and just take a year off to work out, or sign a sneaker deal (you see the common thread here…) and link up with some sort of traveling all-star squad of kids who coulda shoulda been going straight to the league if only the Sternbot hadn’t changed the rules. Thing is, these rumors didn’t necessarily seem all that crazy, so maybe the fact that he recruited Tim Floyd to “coach” him for a year is the most sane thing that could’ve happened.

I guess my point is, don’t sleep. Going back to the circus that was LeBron’s last year and a half of high school, I remember the incredible amount of negativity directed toward him, from people who’d never met him and often hadn’t even seen him play; people had just heard so much about him, particularly that stupid, inconsequential sh*t about some jerseys and a Hummer, and hated on the kid without any real good reason. Too often, that led to even allegedly knowledgeable basketball people talking about how he wasn’t/couldn’t be as good as advertised. Some of us knew better at the time, and most of the rest have figured it out since.

Their stories (and their games) don’t parallel quite so perfectly, but I’m feeling a lot of the same unwarranted hate regarding OJ. If you don’t wanna like the kid because you think he’s a basketball mercenary or knucklehead — and keep in mind, a lot of people hated on Amare for the exact same reasons before he came into the league — or whatever, that’s cool. But purely as a fan, and a smart one, hopefully, you won’t let that get in the way of understanding how good he is.

Best case scenario, he’s a cross between Kobe and Jason Kidd. Yeah, I said it.

Worst case? I’m hoping we won’t have a reason to find out.