Golden State takes a commanding 3-1 series lead back to Oakland. 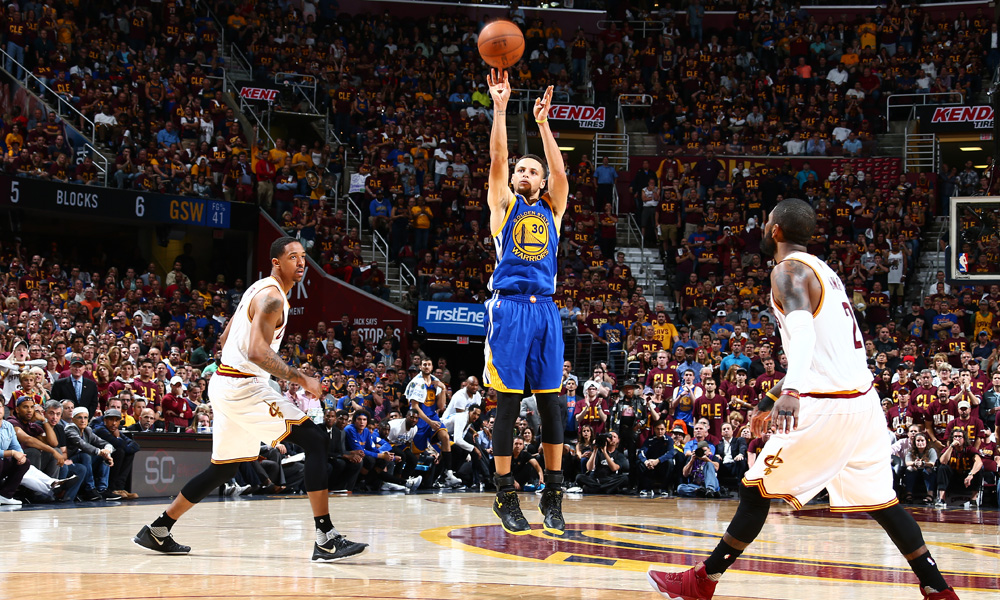 Finally, we got a close one. But it wasn’t close enough for Cleveland.

Stephen Curry scored a game-high 38 points and Klay Thompson added 25 as the Warriors rediscovered their touch in the second half of Game 4, pulling away late for a 108-97 win at the Q.

The Cavs led much of the night but couldn’t counter the in-form Dubs, and now face the daunting prospect of winning three straight games against historically great Golden State.

Kyrie Irving picked up where he left off in Game 3, scoring 34 and making plays at both ends, while LeBron went for 25, 13 and 9, and Kevin Love was solid off the bench with 11 points and 5 boards. But it wasn’t enough against the Warriors’ long-range bombing: 17-36 on threes, including 7-13 from Curry, 4-9 from Thompson, and 4-5 from Harrison Barnes.

The Cavs led 55-50 at the half, with Tristan Thompson (10 and 7 on the night) buoying the stars. But in the third quarter, for the first time in nearly two games, the Splash Brothers looked like themselves, scoring a combined 21 points in a period that the Cavs by led by 8 early on.

When it was over, the Warriors took a 79-77 lead into the fourth. It stayed tight for a while, but Golden State did what seemed inevitable, eventually pushing the lead to 10. The Cavs couldn’t find an answer.

Things got testy between LeBron and Draymond in the final minutes with the game nearly out of reach.

A Game 4 loss at the Q last year cost Cleveland a chance at a 3-1 and all but cost them the series. The numbers were different Friday night, but it felt much the same.

Game 5 is Monday night in Oakland.