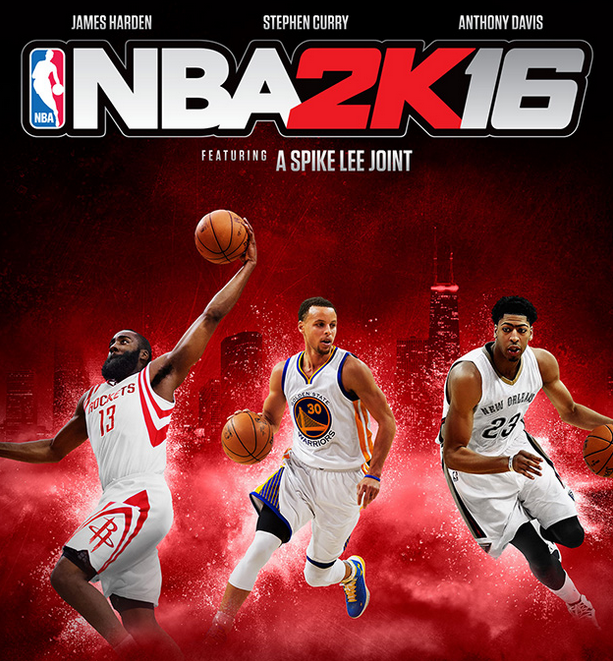 The latest version of the NBA2K video game franchise will have its cover graced by a trio of NBA All-Stars—MVP Stephen Curry, runner-up James Harden and the ever-ascending Anthony Davis.

Check out your boy on the cover of @NBA2K #NBA2K16! Cop it 4 days early w preorder #BeTheStory http://t.co/AtC2nzOLYm pic.twitter.com/XvVKgdifHs

Lee shot about 90 minutes of “cinematic narrative”, which translates to roughly 12 hours of in-game drama.

“We follow a kid through the trials and tribulations of being a top high school player and the decisions he has to make,” Lee said. He says that although he managed to master the intricacies of a 12-day motion-capture shoot at 2K Games’ Bay Area studios, his video game skills leave a lot to be desired. […] “My son’s taught me a bit, but I’m a dinosaur,” Lee said.

Lee — whose dozens of movies range from 1986’s breakthrough She’s Gotta Have It to 2014’s Da Sweet Blood of Jesus — wrote and directed the MyCareer element of 2K16. It was produced by the He Got Game director and New York Knicks fan’s 40 Acres and a Mule Filmworks company. Though the details of the story are still under wraps, themes generally run to avoiding the pitfalls that surface when talent mixes with money.

“I’m guessing every one of us grew up dreaming of the moment we’d be on the cover,” Davis says of the 15-year-old video game franchise. “I’ve seen so many players I know head off and put on a suit with all those balls (for motion-capture duty); it looks so fun.” […] Davis says having Lee take the reins of the story adds another element of realism, “because we all know how much he really loves basketball, we all respect him.”