Steve Nash: Steph Curry May Be the Most Skilled NBA Player Ever 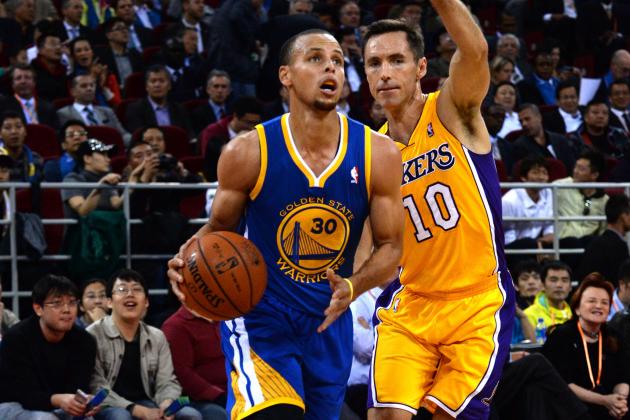 Stephen Curry and the 12-0 Golden State Warriors have entered rarefied air, drawing comparisons to Michael Jordan and predictable blowback from members of the 72-win 1996 Chicago Bulls.

Steve Nash, currently a player development consultant for the Dubs won’t compare Curry to MJ, but argues that the reigning MVP could perhaps be the most uniquely-skilled player in NBA history.

Nash says Steph came back this season as a vastly-improved player, which should strike fear in the hearts of the 29 other teams in the L.

“I wouldn’t compare him to Michael Jordan–I wouldn’t compare anybody to Michael,” Nash told me by phone a little while ago. “But I would say Steph is turning into a historical category of his own, in a way. […] He’s in the prime of his career and will be for a few years and the way he’s improving and the level he’s playing at is… I think he’s unlike anyone else. His ability to make shots and still handle the play-making duties is historic. I think you’d be hard pressed to find a player more skilled than him in the history of the game.”

-Q: Simple question—how much better is Steph Curry than he was last season, when he already was the MVP? He’s better, right?

NASH: “Yeah. Just gets better and better. Game gets sharper. And I still think he’s going to understand things more clearly as well. His skill level improves, which is kind of alarming, He’s maybe as skilled a player as we’ve ever had in this game. […] But he has improvements to make as far as his feel and comfort, the cat-and-mouse thing, strategy and picking and choosing a spot, conserving energy and getting the same amount done. He can improve a lot, which is scary. The skill level is already prodigious and it keeps getting better. And since the experience and understanding will continue to grow, it’s pretty remarkable to think about the heights he can get to.”